The Lord of the Rings as written by....

Trial by Combat: Judicial duels in England and Scotland

Henry Charles Lea's Superstition and Force, 1878 (Thanks to Ariella Elema for pointing me to this.)

"That the lists shall be forty feet in width and eighty feet in length.

"That the duel shall only be permitted when there is presumptive evidence against the accused, but without clear proof.

"That on the day appointed the two combatants shall leave their houses on horseback, with visor raised ; their sabre, sword, axe, and other reasonable arms for attack and defence being carried before them ; when they shall advance slowly, making from step to step the sign of the cross, or bearing an image of the saint to whom they are chiefly devoted and in whom they have most confidence.

“That having reached the enclosure, the appellant, with his hand on his crucifix, shall swear on his baptismal faith, on his life, his soul, and his honour, that he believes himself to have got a just subject of contention, and moreover that he has not upon him, nor upon his horse, nor among his arms, any herbs, charms, words, stones, conjurations, pacts, or incantations that he proposes to employ; and that the respondent shall take the same oaths.

" That the body of the vanquished man, if he is killed, shall be delivered to the marshal, until the king has declared if he wishes to pardon him or to do justice upon him ; that is to say, hang him up to a gibbet by one of his feet.

" That if the vanquished man still lives, his aiguillettes shall be cut off; that he shall be disarmed and stripped ; that all his harness shall be cast here and there about the field ; and that he shall remain lying on the ground until the king, in like manner, has declared if he wishes to pardon him or to do justice upon him.

"That, moreover, all his property shall be confiscated for the benefit of the king, after the victor has been duly paid his costs and damages."

Old and new Paris: its history, its people, and its places by H Sutherland Edwards; London : Cassell and Co., 1893.

And one of their councilors will give them their lance on their thigh, and if the combat is to be fought on foot, a lance in their hand, as well as a small shield (targon) and an axe.

An article from the Journal of Sport History.

These present an interesting comparison to King Rene’s rules and those implied by de Charny’s questions. In the 1479 rules horses may be seized for ransom. “When the tournament is started everybody shall draw his sword and aim at the crest of his opponent; and not at parts where he is unarmed.” This is followed by combat with clubs. “After the announcement that the tournament begins no other weapons than the club must be used. No aiming at parts below the saddle where the opponent is unarmed.....Every participant to have one master at arms only, who has to wear a helmet and protection for his legs. This master is only allowed a stave and a rebaited knife...A prince shall be allowed 4 squires, an earl or lord 3 squires, a knight 2 squires, and a nobleman 1 squire...The squires may escort their masters taking hold of the bridle; they must not push away opponents by the help of their weapons…. Squires are not allowed to grasp the bridles of opponents’ horses.”
Posted by Will McLean at 5:11 PM No comments:

This is definitely worth taking some trouble to see in 3D, so you have a limited time available before the 3D theaters get taken over by the Jonas Brothers on February 27. The 3D complements the corporeality of stop motion animation, and is used with intelligence to underline the difference between Coraline’s real and alternate worlds.

It’s good to see Selick working out from Tim Burton’s shadow: they’ve got a similar sensibility and esthetic in a lot of ways, but Selick is a fine director in his own right. This film made me appreciate how much Nightmare owed to Selick’s direction, even though Burton got top billing as producer and writer and contributed a lot of the character design.
Posted by Will McLean at 1:46 PM No comments:

Karen Larsdatter’s Material Culture Linkspages are often a valuable resource for researching medieval material culture, and she has a lot of valuable material on this subject. Go there first.

Here is some additional material.

A 13th c. canteen of brass inlaid with silver, of Syrian craftsmanship but decorated with Christian themes.

The flask of St. Rupert. This is a wooden field flask or canteen that reputedly belonged to St. Rupert in the 7th-8th century A.D. Around 1345-1400 it was given a case of copper and silver. Whether or not the wooden flask actually belonged to the saint, it must have been plausibly old when it received the metal case.

Here is the description from the Cathedral Museum of Salzburg

Nativity, Mayer van den Bergh Museum, Antwerp, ca. 1400. “has stylistic affinities with Broederlam’s work, but cannot be positively ascribed to him” (Dupont and Gnudi, Gothic Painting) Melchior Broederlam was active 1381-1409. A silver colored field flask is shown in the right foreground, very similar to surviving 15th century examples in pewter or tin. The shape and relative thinness of the lugs is also more appropriate to metal than wood or ceramic.

A greyish colored barrel shaped costrel, possibly pewter or tin with raised decoration is shown in Broederlam’s Flight into Egypt, 1394-1399.

Vessels with the flattened disk shape of pilgrim flasks appear in depictions of domestic scenes no later than the 14th century, Typically, the vessel is similar in shape to the flask actually used by pilgrims, with a foot and flattened disk body, but larger. This form would remain popular for centuries, in part because the flattened sides provided a congenial field for ornamentation. A scene from Machaut’s Remede de Fortune fol. 55, ca. 1350, shows silver colored vessels of this kind in the right foreground. Like their prototypes they are equipped with straps that would have made it easier for servants to carry the capacious flagons.

The January page from the Tres Riches Heures de Duc de Berry shows a gilt version of this sort of vessel displayed on a sideboard.

A pair of silver-gilt flasks of this type from 1400-1440 survive at All Souls at Oxford: note the screw stoppers.

I know of no evidence of cork used as stoppers in England before 1530, although it was used for patten soles and fishing floats earlier. Surviving flask stoppers from the Mary Rose were made of wood wrapped with leather for a tighter seal.

The pewter costrel below was made by Robert MacPherson. The stopper was turned from wood and wrapped with leather. 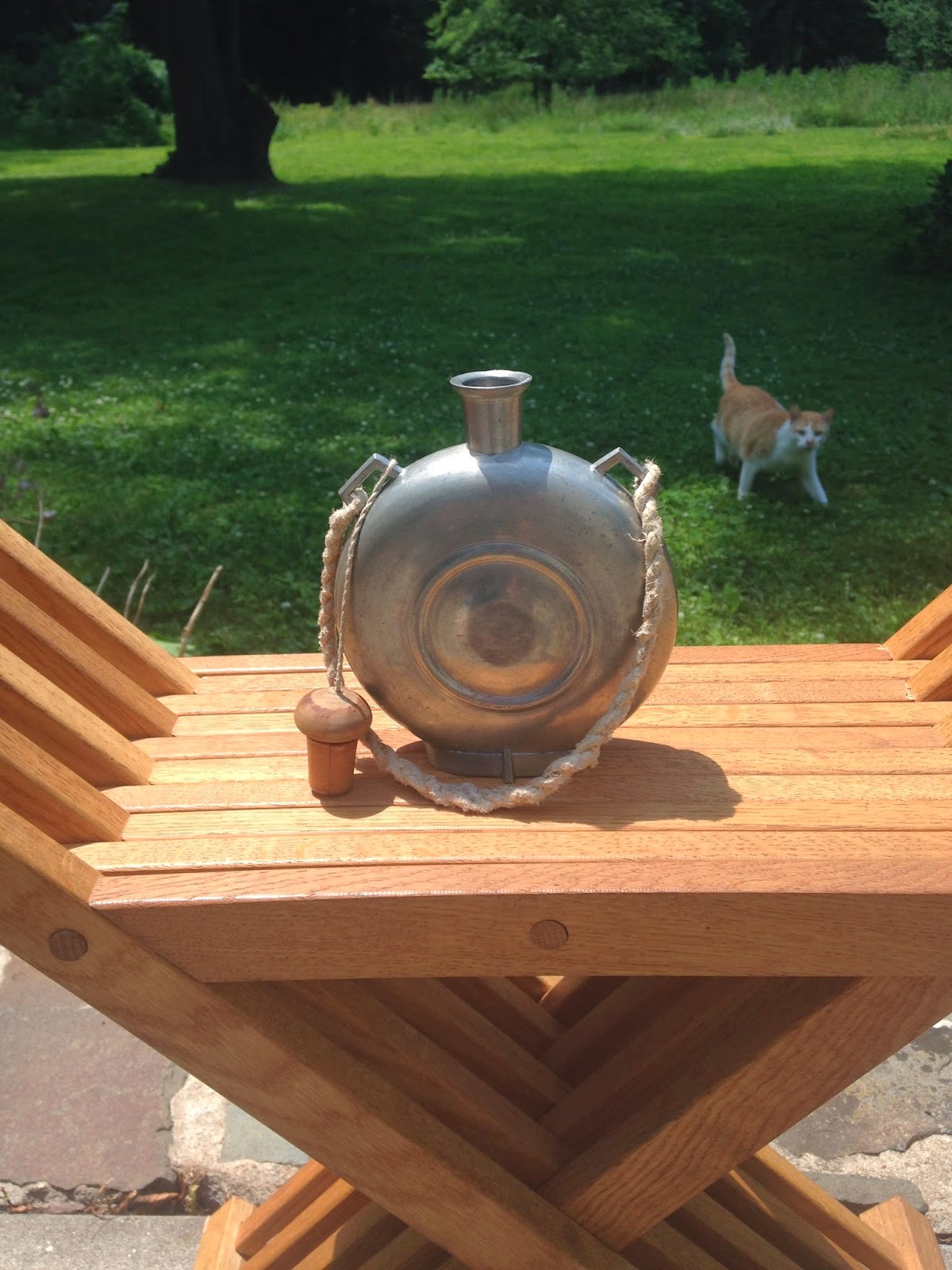 Here. Also, it's a good aerobic workout.
Posted by Will McLean at 7:13 PM 1 comment:

The publications of the Selden Society are now online.

Thomas, Leofwin's son, appeals Alan Harvester, for that he in the king's peace assaulted him as he went on the highway, and with his force carried him into Alan's house,and struck him on the arm so that he broke a small bone of his arm, whereby he is maimed, and robbed him of his cape and his knife, and held him while Emma, [Alan's] wife, cut off one of his testicles and Ralph Pilate the other, and when he was thus dismembered and ill-treated, the said Alan with his force carried him back into the road, whereupon as soon as might be he raised the cry, and the neighbours came to the cry, and saw him thus ill-treated, and then at once he sent to the king's serjeant, who came and found, so [Thomas] says, the robbed things in Alan's house, and then as soon as might be [Thomas] went to the wapentake [court] and to the county [court] and showed all this.

So inquiry is made of the king's sergeant, who testifies that he came to Alan's house and there found the knife and the testicles in a little cup, but found not the cape.
Posted by Will McLean at 6:37 PM 2 comments:

...have been posted at Amazon.
Posted by Will McLean at 6:09 PM No comments:

O brave new world, that has such creatures in it.

You know you want one.

OK, technically not action figures, since the self playing blue flutist isn't posable, and the giant pair of ears doesn't allow you to swap out the knife for a shawm, sackbut or wooden spoon. They're still sweet.
Posted by Will McLean at 11:48 AM No comments:

In My Parallel Universe III

Where the professors complain about the virtual tenure and the Turing tests are multiple choice. Oh, not to mention the cyborg frat boys, and the university fight song is in binary.
Posted by Will McLean at 1:36 PM No comments:

Labels: Living in the Future, We don't need no steenkin' footnotes

Pride and Prejudice and Zombies


Pride and Prejudice and Zombies is scheduled for release April 15, 2009. But who can wait that long? Not I.

IT is a truth universally acknowledged, that a single man in possession of a good fortune must be in want of a wife.

However little known the feelings or views of such a man may be on his first entering a neighbourhood, this truth is so well fixed in the minds of the surrounding families, that he is considered as the rightful property of some one or other of their daughters.

" My dear Mr Bennet," said his lady to him one day, " have you heard that Netherfield Park has been overrun by zombies ? "

Mr Bennet replied that he had not.
Posted by Will McLean at 4:20 PM 1 comment: