The Incandescent Hypocrisy of Mike Griffin

The former NASA head that brought you the failed, ill-conceived Constellation project does not like NASA's current approach to human space flight.

On Aug. 5, the Orlando Sentinel cited internal NASA documents detailing a $38 billion estimate for a “new NASA moon rocket.” This estimate is entirely out of line with previous projections and good management practice. Even if correct, such documents would normally be extremely sensitive and available only to NASA leadership. Their release offers yet another example of the tiresome Washington game of leaking a highly biased story in order to set the terms for an upcoming debate.

Well, it certainly makes sense that cost and schedule of a multi-billion dollar project would be highly sensitive, and thus kept from the eyes of mere taxpayers.

Griffin, incidentally, misleadingly quotes the inaccurate headline, which does not reflect the content of the article. The article describes a $29-38 billion range to pay for not only the rocket, but the capsule to ride it.

To explain why the NASA plan is bad, Griffin himself leaks like a sieve:

NASA’s internal documentation shows the SLS budget assumed by the administration would spend only $1.2 billion per year through 2025, far below the $2.65 billion peak authorized in the 2010 NASA Authorization Act and the $1.8 billion appropriated by Congress in 2011.

But as the program stretches out, it still must absorb its share of the cost of running NASA, an agency with 10 centers and some 24,000 employees (including the Jet Propulsion Laboratory). These fixed costs consume approximately $7 billion per year. This is what it costs to own our national space agency. These internal taxes, when applied to a program that has been slowed to a crawl, maximize cost growth at the expense of hardware development. Under the administration’s scenario, the entire exploration budget would be capped at $3 billion for the next 13 years — including SLS, MPCV and ground operations

We need to compare this with NASA's budget request for 2008, when Griffin was still in charge, and his Constellation program was asking for $3 billion. Or what was actually enacted, when Constellation was funded at $2.7 billion and the full exploration program at $3.3 billion, with about $1 billion of that for Ares I, Griffin's contemporary version of the shuttle derived SLS. This is, of course, a funding level Griffin now claims is clearly inadequate.

This should be compared with NASA's 2012 budget of $3.9 Billion for exploration, plus an additional $1 Billion for space technology, a category not itemized in Griffin's 2008 budget.

Griffin might respond that his own exploration budget for 2012 was much more generous, at $7.1 Billion. He achieved this in part by shrinking the share of NASA's budget devoted to science from 28% in 2007 to 24% in 2012. Also, he made optimistic assumptions. His budget assumed that the Shuttle would be retired by the end of 2010, that 2012 STS shutdown costs would be minimal, and he significantly underestimated the cost of crew and cargo resupply for ISS. Also, he assumed that a NASA owned launcher and manned spacecraft would be able to reach LEO no later than 2015, so there was no reason to for NASA to fund a commercial alternative to take crews to ISS

Griffin was wrong on every single point.

Why should he be given credence on other questions?

What a Pas d’Arms Was and Was Not

The Pas d’Arms was a very specific format for medieval deeds of arms. It always involved a specified number of defenders agreeing to meet all comers on terms specified in advance. It sometimes, although not always, included considerable ceremony.

For those who currently recreate medieval deeds of arms, “Pas” is often used as a shorthand description of any recreation of medieval deeds that attempts to come closer to medieval models than the standard double elimination tournament of the SCA, that places less emphasis on objective competition, and that involves considerable ceremony.

This is not what a Pas was in the Middle Ages. It was only one format among many: other formats, for example, arranged both comers and defenders in advance. The rules of a Pas could be designed to yield an objective winner to a highly competitive contest, and sometimes ceremony and speeches were clearly less important than a briskly arranged series of combats.

Posted by Will McLean at 9:00 PM No comments:

Rembrandt and the Face of Jesus

At the Philadelphia Museum of Art. Well worth seeing if you live close enough. For me the high points were two different versions of the Hundred Guilders Print, showing how much Rembrandt varied his inking from print to get different effect of light and shadow, the virtuoso drypoint of the late Ecce Homo print, and the scumbled luminosity of his late portrait of Jesus, the final painting in the show.
Posted by Will McLean at 11:51 AM No comments: 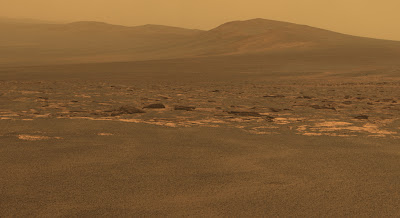 Opportunity has reached the rim of Endeavour Crater, 14 miles in diameter. Click on the image for a larger view.

I wrote this years ago, when both rovers were rolling on Mars. Remarkably, Opportunity is still moving forward and showing us new things

Here. Thanks to Amy Victoria Lindey.
Posted by Will McLean at 10:25 AM No comments:

Videos from the Met

Here Early twentieth century films of armor from the Met being worn, the flexibility of articulation demonstrated, and the resistance of tightly woven mail to puncture shown, as well as the ability of supine men in armor to get to their feet with ease.
Posted by Will McLean at 7:00 PM No comments:

Mscr.Dresd.C.93. Volume I of his manual in German in Dresden
Mscr.Dresd.C.94 Volume II: Paulus Hector Mair MS from 1550 held at the University of Dresden. Note how the otherwise unarmored fencers at sword and buckler are wearing metal gauntlets, apparently with mail protecting the palms (see 150v).

Many of the positions shown in the section on armored combat with spear and targe look remarkably like those in Codex Wallerstein, which Mair owned, even down to the positions of discarded shields and weapons lying on the ground, but with the armor updated to 1550 styles.
Wiktenaur discusses the sources for Dresden C.93-94

Thanks to Scott Cozad for finding these.

Here is a partial transcription.

Here is his Wiktenaur page. 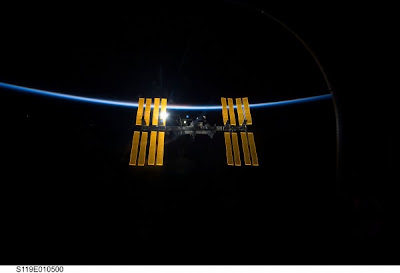 Three football fields in span, with wings like a giant robot dragonfly, the International Space Station falls always towards the horizon. When in sunlight it shines as bright as Venus.

If you know when to look, you can see it in broad daylight. It is the biggest structure built by man that never rests on land or water.

Currently, four different spacecraft can dock or berth there, from Russia, Japan and ESA, the European consortium. If all goes well, by early 2012 there will be two more, both from the United States. SpaceX plans to send their Dragon to visit the station in December of 2011, and Orbital hopes to send their Cygnus in February of 2012.

That's impressive redundancy, although only the Russian Soyuz carries human passengers. We need to correct that.

It is still the premier venue for flute-playing astronauts.

Looking Down at a Meteor

Looking down at a meteor below you: how cool is that?
Posted by Will McLean at 12:23 PM No comments:

Labels: Living in the Future, Robots

Ben Cooper has some impressive pictures of the launch. The core of the rocket is gleaming white not because it's painted that color, but from ice forming on the supercold oxygen tank.

Even that powerful rocket isn't able to send the 3.6 tonne spacecraft directly to Jupiter. It will loop beyond Mars only to fall back towards Earth again for a gravity assist that should send it to Jupiter orbit five years from now.
Posted by Will McLean at 6:26 PM No comments:

As the Asteroid Turns

A series of images from Dawn shows the asteroid Vesta rotating.
Posted by Will McLean at 9:34 AM No comments: