The Oral Tradition Gets It Wrong. Again.

So. I am listening to a performance of the Highland ballad The Bonnie House of Airlie, which is sad and moving in a George R. R. Martin sort of way. There is sex and violence and bloodshed. The bit of historical grit in the pearl of the drama was a conflict in the 1640s when Archibald Campbell, Earl of Argyll, raided Airlie Castle, the home of James Ogilvy, Earl of Airlie.

But the earliest version preserved was a printed broadsheet from 1790, and Child collected oral versions in the 1870s.

And the surviving versions transmute the historical Ogilvy support of Charles I to support for "Charlie" who is "awa'", referring not to Charles I of England but the young pretender Charles Edward Stuart a century later.

The oral tradition is slippery and undependable. If the Song of Roland can't even get the enemy right....

Posted by Will McLean at 9:13 PM No comments:

When I first joined the Society for Creative Anachronism in 1975, the default tournament format was a double-elimination tournament tree based entirely on modern sports events. Each round ended with a clear winner, based on the somewhat stylized standard rules for Society combat at that time. All blows counted as light (ignored), "kills" (powerful enough to end the fight even against an armored opponent) and "wounds"(blows that incapacitated an arm or leg, while leaving the victim otherwise unimpaired.)

In the late 1980s, I started trying to understand how medieval deeds of arms were actually structured., and how medieval armored combats were won or lost. I wasn't the first to attempt this: I know that David Friedman tried to recreate combats for an agreed number of blows much earlier.

It took about two decades to work out more realistic sets of combat  conventions that were still acceptable variants of SCA rattan combat, and formats for deeds of arms that better reflected how they were actually fought in the 12th-16th century.

One key insight was figuring out that that in combats for a previously agreed number of blows, the sequence normally ended as soon as *either* champion had thrown that number. This avoided the unrealistic artifact of previous reconstructions when one fighter could hoard his last few blows until his opponent had thrown all of his, and then go on the offensive knowing that his opponent could do nothing but defend.

Another thing important thing I learned in the two decades after 1990 was that there were several different formats for consensual deeds of arms in the Middle Ages, and none of them were much like a modern double or single elimination tournament.

The third was that the classic default rules for SCA armored combat didn't recreate actual medieval armored combat well at all. Fortunately, the Society was willing to accept variant rules as acceptable variations for specific contests on a case-by-case basis.

The best and most authentic recreations of medieval combat and deeds of arms within the SCA have improved a lot since ca. 1990.

I just finished Ken Macleod's Stone Canal, and enjoyed its whimsey and grandiosity.

I think Macleod's political biases have led him to imagine, writing in the 20th century, a 21st century in which the most dangerous state threats to peace and freedom will be about 180 degrees from the reality of our current timeline.

Perhaps more problematic, his story is written with a very optimistic view of the near term potential for personality uploads and downloads, cloning, and nanotech. I don't think this will age well.

It reminds me of the Heinlein's optimistic view of rocket technology while writing in the mid 1950s. It seemed plausible, until you looked closer at the contemporary state of the art.

If, in my lifetime, we succeed in uploading a crude, low fidelity emulation of a human personality to a computer, that would be an amazing achievement.  It would be a very big deal. Imagine a rover on Mars with brain that wasn't a robot, that wasn't quite human, but that was pretty close.

Posted by Will McLean at 9:38 PM No comments:

The nominations for the 2014 Hugo awards include in the best novelette category, one work by the memorably odious racist sexist homophobic author writing as Vox Day.

Is this a big problem? I think not.

Second, if the artist's false worldview damages their art, that should count against their art as art. The racism in Gone With the Wind and Stalinism in Alexander Nevsky were odious, and both works would have been far better without them.

Third, I think that Vox Day writes poorly enough that his work can and will be rejected on its merits.

Posted by Will McLean at 8:29 PM No comments:

The repeal of the Corn Laws in 1846 was one of the great policy changes of 19th century Britain. It had the effect of lowering the incomes of wealthy landowners and raising the real incomes of most other people by lowering the cost of grain. Since it allowed Britons to buy grain from the places where it was cheapest to grow and concentrate on producing the goods where Britain had a comparative advantage, it was good for the overall economy.

If we see inequality as a problem, we should concentrate on policies that similarly increase the pie at the same time we redistribute income.

Reduce copyright term to the Berne Convention minimum. Current law is an expensive and inefficient way to hand excessive monopoly rents to a relatively small number of individuals.

Reduce or eliminate entirely the number of patents granted for software: again, this is a very expensive way to grant monopoly rents.

Lower the cap on the mortgage interest deduction: it's regressive and distorts the housing market.

Cap the tax exclusion of employer provided health insurance: it's regressive and distorting. Better yet,  replace it with a tax credit of the same total value.

Reduce and eventually eliminate agricultural subsidies and tariffs: they're regressive and distorting.

These are all policies that would be good for equality and good for the economy.
Posted by Will McLean at 2:59 PM 4 comments: 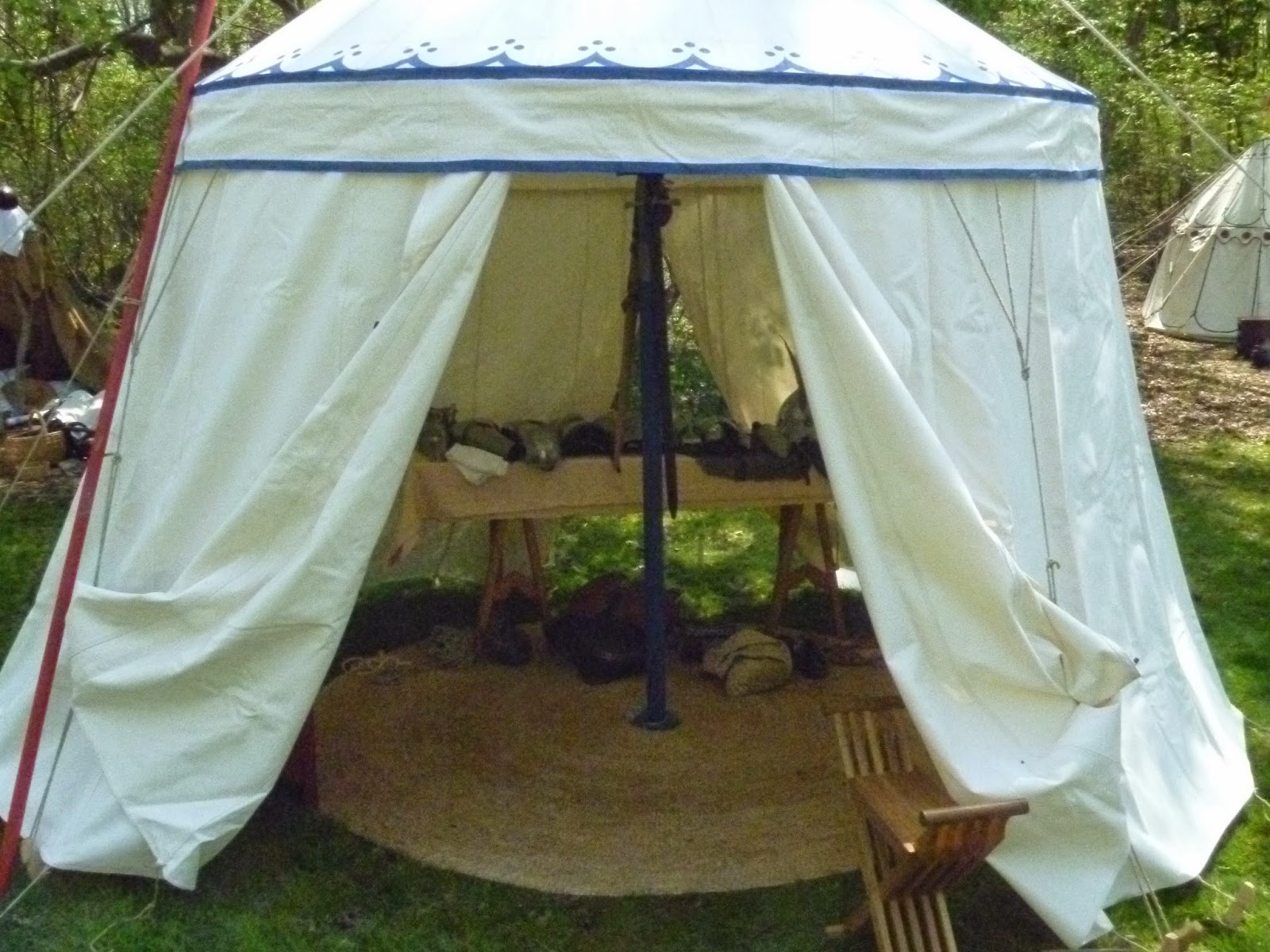 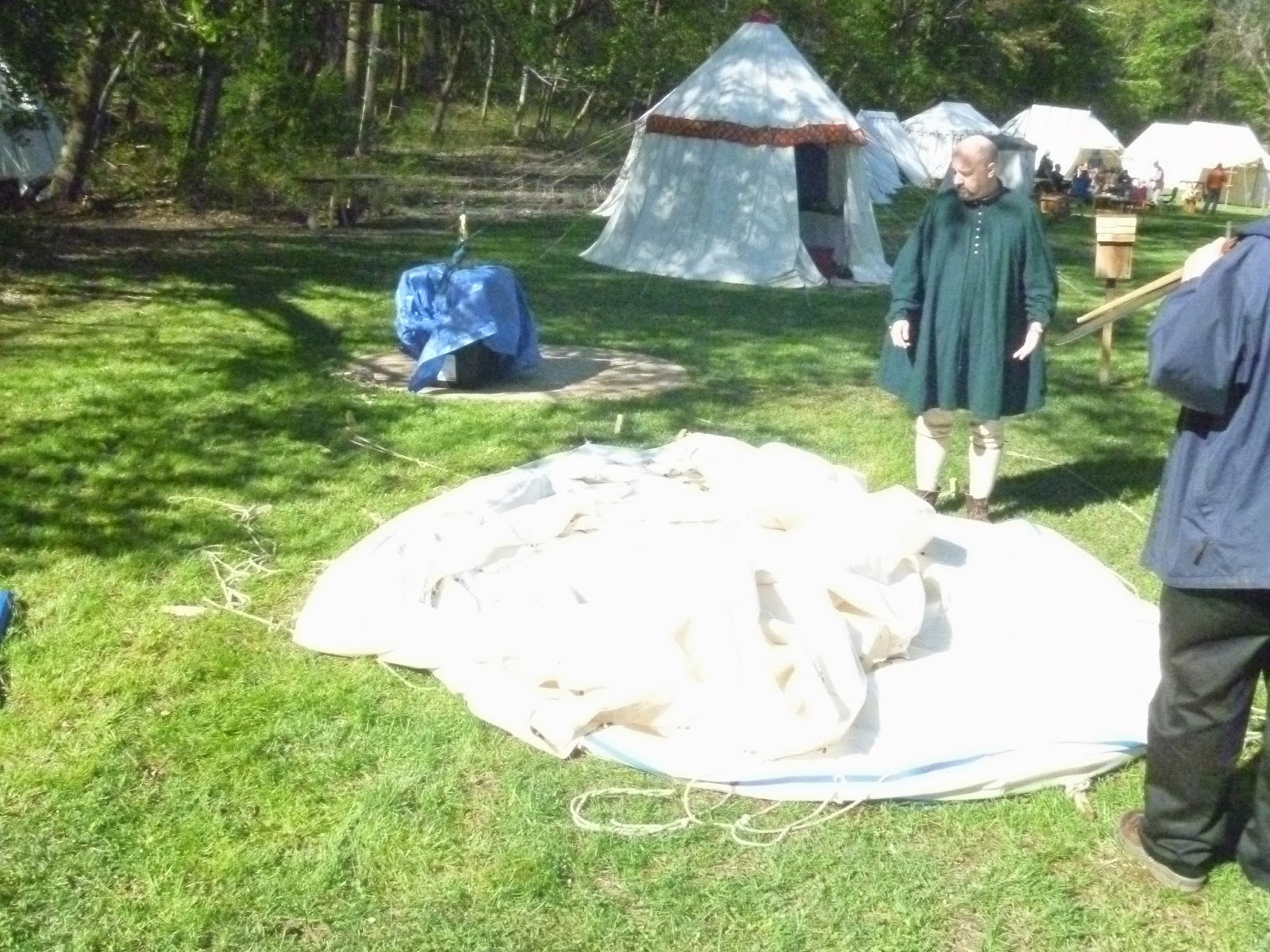 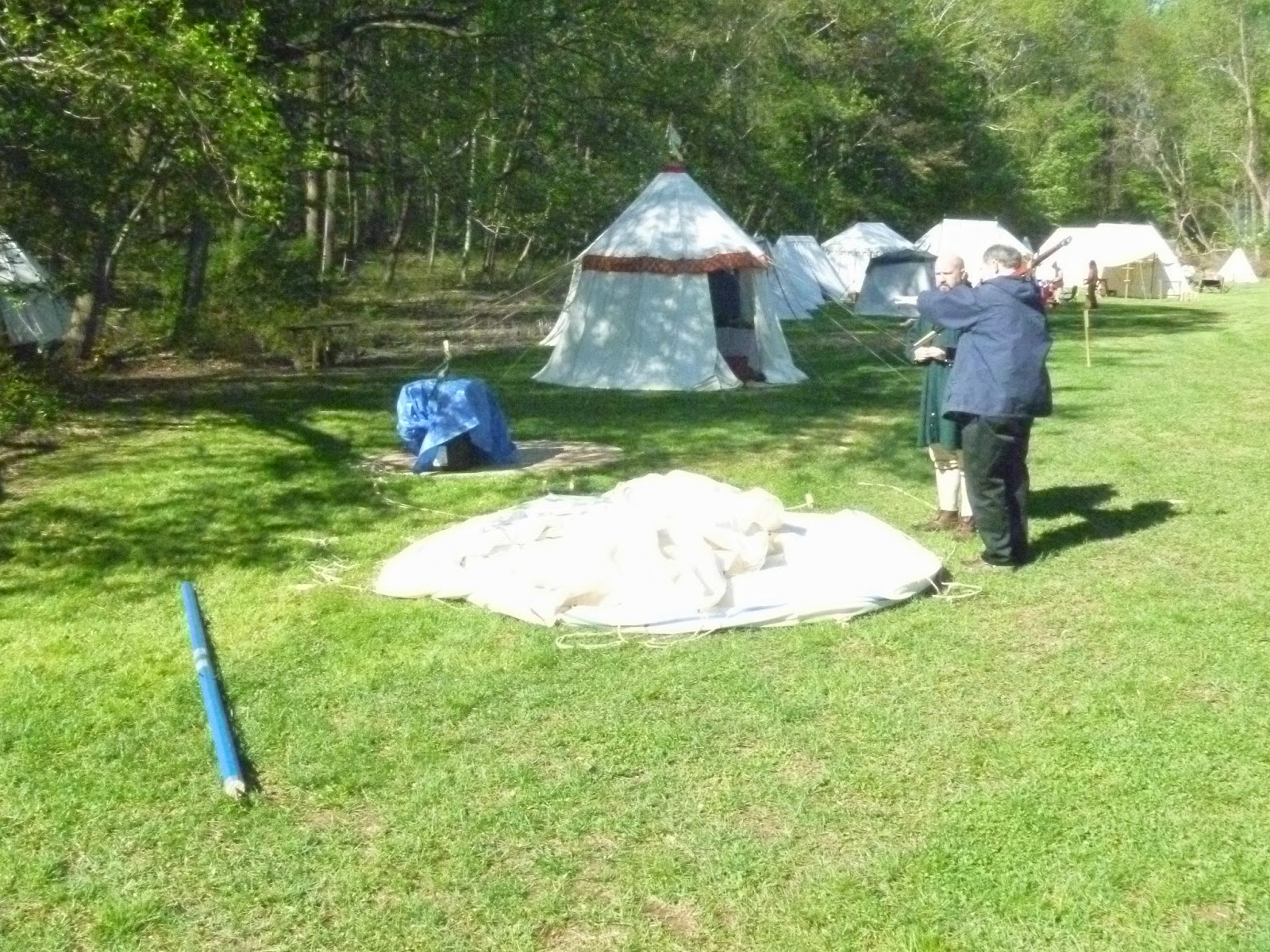 The evening of April 26,  2014 I had my reconstruction of a medieval hoop-spread pavilion set up at Marietta Mansion in Glenn Dale MD for a military history timeline event. The ground was soggy and a thunderstorm blew through, late on the 26th or early on the 27th.

One member of our group was on site. He heard but did not see the tent fail.  Examining the scene afterwards, it appears that the guy and wall stakes pulled out of the ground on the windward side, the tent center pole left the ground, and the tent blew downwind until checked by the remaining guy and wall stakes on the leeward side.  The tent roof landed with the inside facing upwards. In the second and third photo above, you can see the circular mat in the background that was in the center of the pavilion before it was blown down. Aside from removing the tent pole the pavilion is where it landed.

An adjacent rope-spread pavilion of about the same size survived intact. I attribute the difference to the rope spread pavilion using at least twice as many guy ropes staked down over a broader footprint, the hoop spread pavilion perhaps being more vulnerable to updrafts, and my own failure to stake the tent down as deeply as possible.

I seem to have reproduced a not uncommon failure mode for this kind of tent.
Posted by Will McLean at 10:17 PM No comments: