The long unmet need has now been met. Also available as throw blanket, area rug and curtains.
Posted by Will McLean at 6:27 PM No comments: 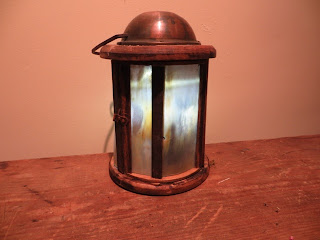 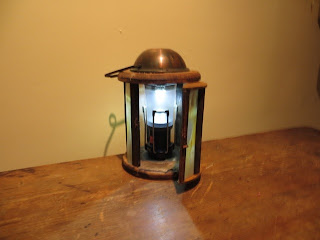 I retrofitted an old Historic Enterprises lantern with a more appropriate two pane door and removed the candle holder so it can hold this little LED lantern. The original narrow door made even changing a candle difficult and awkward.  Unfortunately, I was constrained by only having horn from the original lantern available, so the door panes are asymmetrical. Also, I wish the horn panes provided absorbed less of the light passing through them. Still, it works, and just in time for Pennsic.

It was entirely possible to make sheets of horn so thin and clear that you can read type through it: this was, after all, what was used for hornbooks.  Unfortunately, panes of horn of this transparency or translucency are now very difficult to obtain.

The tops of the medieval prototypes for this lantern were probably simply turned from a single piece of wood.  That's what was used on lanterns recovered from the Mary Rose, so we should presume that that construction worked reasonably well. In the Lyversberg Passion the dome of the lantern also seems to have simply been turned from wood.

Here is more on medieval lanterns.
Posted by Will McLean at 5:07 PM No comments: 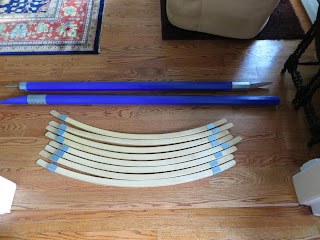 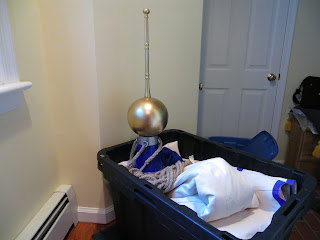 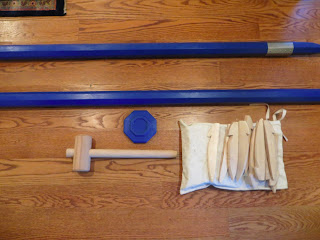 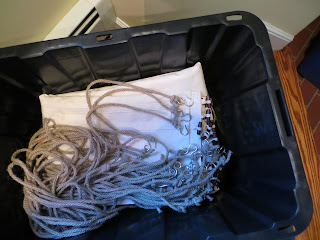 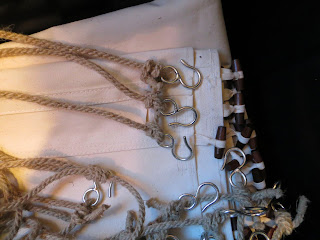 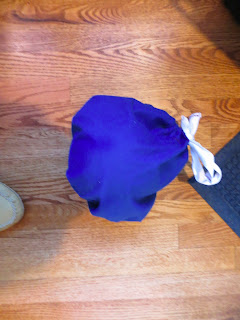 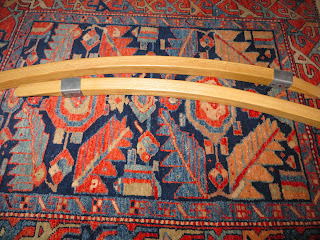 1. The sectional tent pole and hoop. All of the joints are skarf joints reinforced by a pair of steel bands formed on a mandrel. The bands on the pole are tinned, those on the hoop galvanized. The pole is Home Depot Select Pine. The wood is ash, steam bent to shape by Amish wood benders. Sew your canopy before you order the hoop, as over many seams small variations can add up to a significant difference in the final circumference.

2. The gilded flagstaff and ball atop the tent. Everything but the pole, hoop and pegs can fit into a single 27 gallon container, but the result is rather heavy so I will see if it can be efficiently divided into two smaller containers. Update: it can. Everything but the pole and hoop fit comfortably into two 18 gallon containers, including wooden pegs and mallet.  A blue flannel bag to protect the gilded ball is visible to the right of the blue cone beneath the gilded ball.

3. Tent pegs, wooden mallet, and base for the tent pole. Without a base the tent pole tends to drive a deep crater into the circular jute rug I plan to use inside the tent.

4 & 5. The shoulder guys form a three rope crow's foot at the top, and are tied to tinned hooks for flexibility in repositioning or using a greater or lesser number of guys.

6. A blue flannel bag to protect the gilded ball in transit.

7. The woodbender did not provide the ordered radius for the wood hoop, but about eight inches less in diameter. Since what I wanted was not a standard size, they bent to a smaller radius on one of of their standard press forms, and then relaxed the wood to attempt to achieve the desired radius. The result is only an approximation of the desired result, and so takes a lot more effort to assemble or disassemble than it should. Allow yourself plenty of time for the bending order: in my case the benders claimed they could meet the needed schedule but started late, and probably shipped before the segments had entirely dried.
Posted by Will McLean at 8:24 PM No comments: 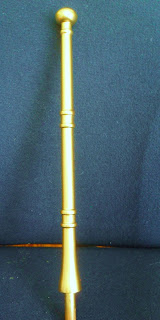 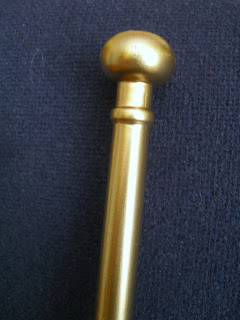 The little flagstaff for the ball atop my pavilion. Mac turned it from wood, sealed it and filled cracks with polyurethane, and painted it with Rust-oleum gold. The original plan was actual gold leaf, but we discovered that the only adhesive size we could find locally was probably not suitable for outdoor use, and the kind we needed would almost certainly take longer to deliver than we had before the tent needed to finished.
Posted by Will McLean at 5:24 PM No comments: 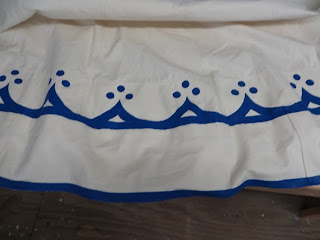 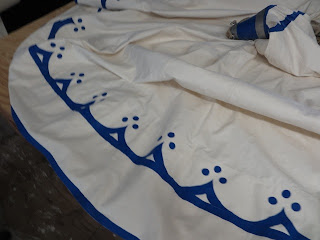 The current decoration of the valance and lower edge of the roof.
Posted by Will McLean at 7:13 PM No comments: 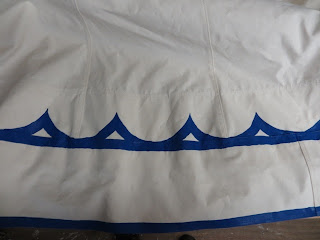 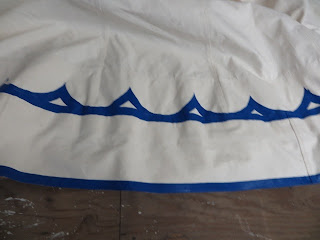 Here you see the current state of decoration: horizontal bands at the the top and bottom of the valance, and engrailed decoration at the lower edge of the roof.

For the latter I cut a compass-based template, used it to draft pencil lines, and painted to the lines with a brush.

I had originally hoped to make more use of stencils. You may be able to see that not only is none of the fabric remotely flat, but sewing it together creates puckers of immense complexity.

At the lower edge of the valance I was able to use masking tape to create a clean line. At the upper, I could not. The best I could do was try to mask the border between the valance and roof as an unreliable backstop for brushstrokes that  landed too high
Posted by Will McLean at 10:30 PM No comments:

Wooden tent stakes are considerably harder to drive than a similar length in steel, but also hold correspondingly better.

For decorating a tent, a brush that is sold as n wide will be best suited to painting lines that are somewhat wider than n.

Posted by Will McLean at 9:45 PM No comments: 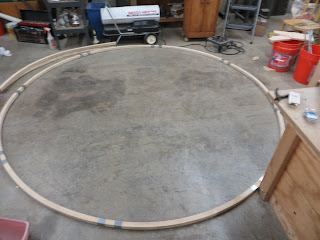 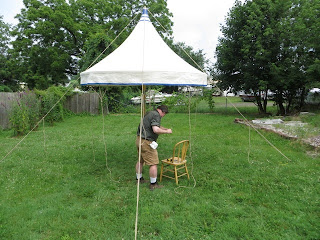 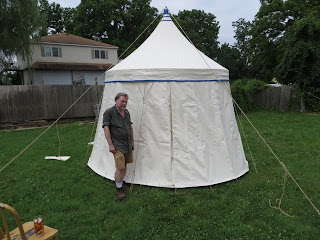 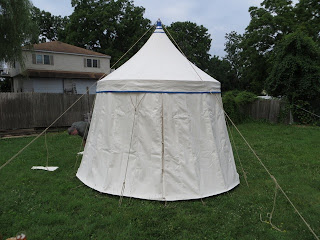 The first picture shows the wooden hoop for the shoulder of the tent. There are eight segments, and each is joined to the next by a skarf joint and two ferrules.

The second shows the roof with the hoop in place. Here it is steadied only by four of what Il Libro del Sarto calls master guys, which run to fittings on a cone at the top of the tent.

The third shows the tent with walls, shoulder guys and the tentmaker included for scale.

In the fourth the tentmaker has shifted to the background to check stake positions.

Posted by Will McLean at 7:47 PM No comments: 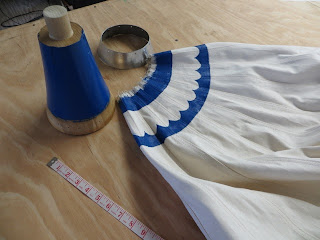 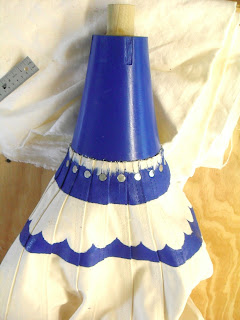 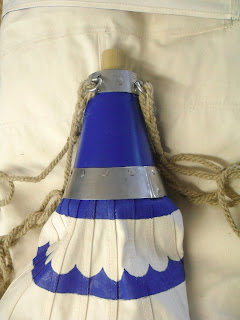 I commissioned a pavilion from Robert MacPherson. He is producing the design, the tent, and almost all of the fittings. Bent ash for the sectional hoop at the shoulder was ordered from a Lancaster County woodcrafter and hand cleft ash tent pegs from H W Morgan & Sons. I have been painting the canvas.

Here you see how the canvas is nailed to a turned wooden cone that will be fixed on a steel rod protruding from the top of the central pole. The top of that pole is reinforced with a ferrule. A conical  steel band was nailed over where the canvas was nailed to the cone, and the gap between wood and steel will be caulked at the top.

The cone was turned from laminated poplar, made from pieces a nominal 1" thick. The pavilion tops made for the king of Scotland in 1496 were turned from ash.

A second steel band is nailed to the top of the cone, fitted with four rings to attach guy ropes.

A gilded wooden ball will be fixed atop the cone.

The first photo is mine. The others were taken by Robert MacPherson.

Posted by Will McLean at 7:41 PM No comments:

I was born a citizen of the United States of America. I inherited the Magna Carta at no additional charge to me. Also, the fruits of the long struggle between representative government and the executive before 1776. And the struggle for liberty thereafter.

My friends elsewhere in the Anglosphere have experienced a different path, but also one that bent towards freedom.

Elsewhere still, I wish you success. Liberty and self-rule is a hard road, but worthy,
Posted by Will McLean at 9:14 PM No comments:

It took the French five tries before they got one that seems to be lasting. We did better, but we needed to reboot in 1787, and afterwards to fight a bloody civil war and amend the Constitution 27 times. And we had the advantage of originally starting as part of a nation that had already done Runnymede and the English Civil War and the Glorious Revolution, and one where the Magna Carta was seen as a reaffirmation of rights and liberties long held.

July Fourth was a great step forward, but a step on a long road, and not the first step. The path to liberty and self-rule can be long and difficult, with many reverses. Those that seek it in Egypt, Turkey and elsewhere have my best wishes. Rise, and rise again.

"Life, Liberty and the pursuit of Happiness." All of us are endowed with these rights. The challenge is, how shall we preserve them?
Posted by Will McLean at 6:40 PM No comments:

His books are his great memorial, but this is still a nice tribute.
Posted by Will McLean at 4:01 PM No comments: 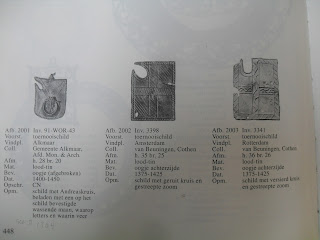 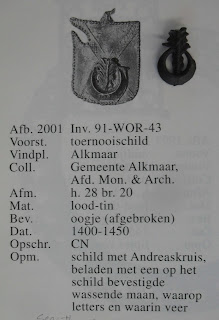 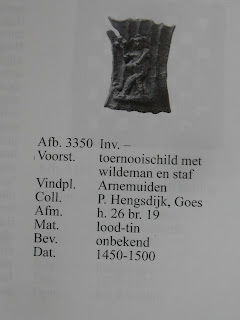 A fair number of these little pewter badges survive. In some, like the second and third in the first picture, the design is cast with the shield. In others, like the crescent and feather and the wild man, the device or badge is cast separately, with a peg that passes through a hole in the shield  to secure it. I know of no contemporary record of their purpose.

I have three theories, which is two too many. The first is that they are similar to the little shields given out by the pursuivants as the tourney is announced in King René's tournament book, who describes "how the pursuivants give a little shield with the arms of the judges to all who wish to take part."  The accompanying illumination shows the recipients fastening the shields to their hats.  The flaw in this theory is that pewter badges are relatively cheap, low prestige goods, and not very appropriate for the kind of people that can afford to take part in jousts.

The second is that they were inexpensive souvenirs, sold to those attending either a particular joust, or to recurring jousts hosted by the same town.

The third is that they were worn as identifying livery by the many servants; grooms, valets and guards in service to the host of particular joust.

I think the second and third explanations are most likely.

I can also suggest a specific event that may have been associated with the wild man badge: the Pas de la Dame Sauvage held in Ghent in 1470.  The host of the deed of arms was led onto the field by performers dressed as wild men and women.