We Throw our Servants into the Dark...


Meanwhile, having passed Jupiter, New Horizons is halfway to Pluto, on its way to the cold outer marches of our Solar System.
Posted by Will McLean at 9:16 PM 1 comment:

The Return of Atlantis, Seen from Space 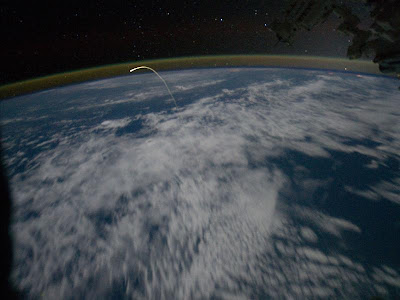 Image credit: NASA
Posted by Will McLean at 11:41 AM No comments:

The Complete Shuttle Missions in Order

I found this retrospective moving, although it was painful to watch, knowing that I would inevitably again see the destruction of Challenger and the loss of Columbia.

Our astronauts are still up there. We will need to depend on the Russian Soyuz for a few years, but we will be back with our own mannned spacecraft.
Posted by Will McLean at 12:28 PM No comments:

What a Lovely Home We Have


Messenger looked back at Earth. Beautiful, isn't it?
Posted by Will McLean at 7:17 PM No comments:

Posted by Will McLean at 1:14 PM No comments:

Some impressive photos here.
Posted by Will McLean at 11:07 AM No comments:

I can has vernacular Bible?
Posted by Will McLean at 10:18 AM 1 comment:

During decommissioning..
Posted by Will McLean at 5:49 PM No comments:

The Shuttle and the Future

One of the problems with the Shuttle was that it was an enormous rocket with huge fixed costs. After the retirement of Energia/Buran, its Soviet copy, it was, by a huge margin, the biggest rocket in the world. The fixed costs of operating it was about $2 billion a year even in years the Shuttle did not fly at all.

It did one thing very well: carrying crew and cargo to a space station and helping to build it.

It was also capable of servicing, repairing and upgrading the Hubble Space Telescope. Arguably, it would have been less expensive to plan from the beginning to launch several progressively improved versions of the telescope.

It could and did recover or repair other satellites for reuse, but those missions were much more costly than launching a replacement. It could and did put satellites into low earth orbit, but it was found that other rockets could do the same job for less money and without risking a human crew.

In the end, it was a special purpose vehicle, used to support ISS and occasionally service Hubble. NASA was essentially the only user, and so absorbed the fixed and variable costs year after year, severely restricting NASA's ability to fund other human spaceflight projects. NASA was unable to simultaneously operate the shuttle and develop a replacement.

Other, smaller rockets are more flexible. Atlas, Delta and Falcon can split their much smaller fixed costs among several government agencies, and possibly commercial customers as well.

In retrospect, building a huge specialized launcher with NASA as the only customer was a mistake if there is a reasonable alternative

Unfortunately, there are many in Congress and at NASA who want to repeat the mistake, building a huge, specialized launcher with NASA as the only customer, reusing as much Shuttle technology and infrastructure as possible.

The attractions of this are obvious if your district is making Shuttle components or operating Shuttle infrastructure, or if you work at a NASA center that expects to oversee or operate the Shuttle-derived launcher.

For everybody else, this is a bad idea. At the funding that NASA can realistically expect, a specialized mega-rocket is not the best way to get beyond low earth orbit.

We can return to the moon or visit asteroids with existing launchers, using spacecraft assembled and loaded with propellant in low earth orbit. Ed Kyle explains.

At worst, we use a brute force approach and storable propellant for the departure stage. This is less efficient, pound for pound, then liquid hydrogen and hydrogen, but it's proven technology. We know that storable propellant can be stored for long periods and is routinely transferred in low earth orbit.

I believe that we can do better. It should be possible to store cryogenic propellant with limited boiloff in LEO and transfer it in orbit. This would significantly reduce the mass required in LEO for any given mission. If not, we can fall back to storable propellants.

This approach has several virtues. NASA would avoid the need to develop and maintain their own unique launch system, freeing more money for spacecraft, other systems, and missions. At the same time, shipping propellant and hardware to LEO would be a significant new market for which currently underutilized US launch companies could compete, spreading their fixed costs over more missions and significantly lowering average launch costs.
Posted by Will McLean at 8:11 PM No comments:

The End of an Era

The Shuttle has been an amazing achievement and a splendidly capable piece of machinery. And, once the orbiter shed the ungainly solid boosters and utilitarian external tank, a beautiful one.

It has also been, like the Concorde, an economic disappointment that attempted too much too soon and promised too much, a costly detour on the road to growing human use of the universe beyond our atmosphere. The magnificent yet fragile machine has been described as a hypersonic Ming vase.

Keith Cowing has written a moving reflection on the program . Rand Simberg describes 6 False Lessons of the Space Shuttle, and he's mostly right.

I'd argue with his #3. The Shuttle Proved that Cargo and Passengers Should Travel on Different Vehicles. At the current state of the art, we want a manned spacecraft using a launcher that's as simple as possible (to minimize failure modes) that flies as often as possible (to build reliability). In practice, that means a fairly small manned spacecraft with very limited cargo capability.

He also argues here, that the last flight of the Shuttle only marks the end of the big government model for the best way for humans to flourish beyond our atmosphere.

David Brooks on Making a Reasonable Compromise on the Budget Ceiling

The party is not being asked to raise marginal tax rates in a way that might pervert incentives. On the contrary, Republicans are merely being asked to close loopholes and eliminate tax expenditures that are themselves distortionary.

This, as I say, is the mother of all no-brainers.

More here. Megan McArdle comments here and here.
Posted by Will McLean at 12:45 PM No comments:

A Republic, If You Can Keep It

If there is a lesson in all of this it is that our Constitution is neither a self-actuating nor a self-correcting document. It requires the constant attention and devotion of all citizens. There is a story, often told, that upon exiting the Constitutional Convention Benjamin Franklin was approached by a group of citizens asking what sort of government the delegates had created. His answer was: "A republic, if you can keep it." The brevity of that response should not cause us to under-value its essential meaning: democratic republics are not merely founded upon the consent of the people, they are also absolutely dependent upon the active and informed involvement of the people for their continued good health.

The full essay is here.

Since its founding, our republic has been both admirable and imperfect. Will Wilkinson has a good post over at the Economist on the insufficiently remembered minority of the founding fathers who truly worked tirelessly to end slavery.

Ms Bachmann can easily correct the record, and sound smart to boot, by insisting on a distinction between those founders who really did fight tirelessly to end slavery and those who fought tirelessly to tilt the young country's balance of power toward states filled with human chattel who could not vote. And she ought to stop name-checking John Quincy Adams and start agitating for the eternal glory of John Jay. Or Gouverneur Morris. He had a peg leg.

We should be proud of the truly admirable aspects of our republic and its history, but humble about the things we got wrong and continue to get wrong. And by we, I don't just mean the people in the other political coalition.

It's seductive to believe in the policies that inconvenience us the least: that the budget can best be balanced by raising taxes on someone else, or by cutting government spending that benefits someone else, or that magical tax cuts will always and everywhere increase revenue.

But more often, the right thing to do will inflict pain on us personally. As good citizens, we need to face that.
Posted by Will McLean at 11:26 AM No comments:

Posted by Will McLean at 8:23 AM No comments: