An editorial by Michael B. Mukasey describes Tamerlane as "the 14th-century Muslim conqueror famous for building pyramids of his victims' skulls to commemorate his triumphs over infidels". This misses Tamerlane's essentially ecumenical approach to skull architecture. He also built towers of Muslim skulls at Aleppo, Ankara, Baghdad, Damaghan, Herat, Isfahan, Sabz-Awar and Zirih.

Also, for a supposedly devout Muslim he was inordinately fond of wine at feasts.
Posted by Will McLean at 2:23 PM No comments:

Those That Rush Towards Danger

We have those that rush towards danger
Some wear badge or uniform
And some only are discovered
In the moment of alarm.
Posted by Will McLean at 10:04 PM No comments: 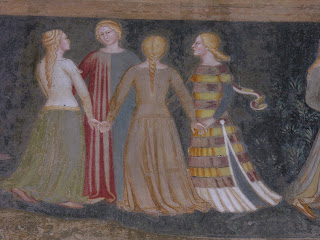 Andrea di Bonaiuto da Firenze. Note the contrasting skirt of the leftmost figure of the top image, the classical bodice of the second figure from the left in the lower image, and the strip of contrasting fabric at the hem of the skirt of the rightmost figure in that image. You can click to embiggen.
Posted by Will McLean at 1:38 PM No comments:

A useful collection of contemporary documents.
Posted by Will McLean at 6:19 PM No comments:

Daniel Day-Lewis and Tommy Lee Jones turned in powerful performances as usual. The last four months of Lincoln's life provided the ingredients for a great drama that mostly respects the actual facts: enormous stakes and moral issues, a narrow margin of victory and great characters.

Tommy Lee Jones gave me a new appreciation of Thaddeus Stevens and his moral clarity and genius for invective. But we were fortunate that we had Lincoln as president, with his lovability and recognition of politics as the art of the possible, his lawyerly precision in his promises and his willingness to bend on everything but the most important thing.

We are lucky to have had the leaders we had in our greatest crises, and in this one more than any.
Posted by Will McLean at 1:49 PM No comments:

A Staggering Saga of Epic Sock-puppetry

It's like an academic and literary version of the rat bastard click farmers who create a network of bogus interlinked sites to improve their Google rank.
Posted by Will McLean at 12:19 PM No comments:

If Cordwainer Smith was a minority taste, let me also recommend Algis Budrys. He was not very prolific, but his best was very good. My favorite was Michaelmas, which I would describe as a book in which someone not unlike an alternate universe Peter Jennings was the secret defender of humanity. Who?, The Falling Torch,  Rogue Moon and Hard Landing were all well worth reading.
Posted by Will McLean at 9:41 PM No comments:

As Steve Muhlberger noted, Cordwainer Smith "was always very much a minority taste." If you've read him and didn't find him to your taste, fair enough. If you haven't you may be missing something.

Like Iain M. Banks, he set most of his work in a rich, whimsical, hedonistic post-scarcity society that nonetheless dealt with serious threats with merciless efficiency. Like Banks, he explored themes of personhood, cruelty and compassion. Both displayed extravagant imaginations that could invent an ancient ruined processional highway above the clouds leading to a prophetic machine of forgotten origin, or a civilization living in a titanic replica of a castle so enormous in scale that the rooms are kilometers across and climbing the furniture is a feat of mountaineering.

Here is a taste of Smith from the short story Under Old Earth. The dying Lord Sto Odin is going to wager the remnants of his life against an existential threat to Earth, far beneath its surface:


Go he did. He used one of the most peculiar conveyances ever seen on Earth, since his own legs were too weak to carry him far. With only two-ninths' of a year to live, he did not want to waste time getting his legs re-grafted.

He rode in an open sedan-chair carried by two Roman legionaries.

The legionaries were actually robots, without a trace of blood or living tissue in them. They were the most compact and difficult kind to create, since their brains had to be located in their chests—several million sheets of incredibly fine laminations, imprinted with the whole life experience of an important, useful and long-dead person. They were clothed as legionaries, down to cuirasses, swords, kilts, greaves, sandals and shields, merely because it was the whim of the Lord Sto Odin to go behind the rim of history for his companions. Their bodies, all metal, were very strong. They could batter walls, jump chasms, crush any man or underperson with their mere fingers, or throw their swords with the accuracy of guided projectiles.

The forward legionary, Flavius, had been head of Fourteen-B in the Instrumentality—an espionage division so secret that even among lords, few knew exactly of its location or its function. He was (or had been, till he was imprinted on a robot-mind as he lay dying) the director of historical research for the whole human race. Now he was a dull, pleasant machine carrying two poles until his master chose to bring his powerful mind into bright, furious alert by speaking the simple Latin phrase, understood by no other person living, Summa nulla est.

The rear legionary, Livius, had been a psychiatrist who turned into a general. He had won many battles until he chose to die, somewhat before his time, because he perceived that battle itself was a struggle for the defeat of himself.

At his best, Smith was eccentric, imaginative and deeply moving. This is one of my favorite stories, along with The Dead Lady of Clown Town and Alpha Ralpha Boulevard.
Posted by Will McLean at 9:39 PM 1 comment:

Except for Cosmas Indicopleustes.

Cosmas who, you ask? That's pretty much what they said back then, too. Except for the scholars who didn't ask because they knew he was a crank who managed to make several sea voyages to India without managing to notice the way ships go hull down on the horizon as the distance increases, and likewise how the heights on the coastline are hidden last as you sail away from them.

Pseudepigrapha and the Internet

If a quote on the Internet attributed to a respected historical figure sounds incredibly apt to contemporary politics, it is probably spurious.

Spurious attribution goes back long before the Internet, so far back that the Greeks had a word for it: Pseudepigrapha. Claiming the mantle of a respected author as your sock puppet is an effective way to get unearned respect for your writing, at least until people figure out that the respected author didn't actually write it. Thus the so called Homeric Hymns.  After their impostures were exposed later writers would refer to the authors pseudo-Appollodorus and pseudo-Eratosthenes, as we should refer to pseudo-Jefferson and pseudo-Lincoln. The prefix can be abbreviated, as in ps-Jefferson.

The miracle of the Internet makes it easier than ever to publish Pseudepigrapha, so train yourself to notice these common signs, so you don't embarrass yourself by reposting them to Facebook. For example:


The budget should be balanced, the treasury should be refilled, public debt should be reduced, the arrogance of officialdom should be tempered and controlled, assistance to foreign lands should be curtailed lest Rome become bankrupt. The mobs should be forced to work and not depend on government for subsistence.

1. Attributed to highly respected author. Jeffferson, Franklin, Lincoln and Churchill are other favorites.
2. No citation of the source.
3. Extreme aptness to contemporary politics. This is a warning flag, because past political concerns rarely map so neatly to today. Why was Cicero getting worked up about foreign aid in 55 BC? Roman policy was that foreign countries should aid Rome by being defeated and looted by Rome. Cicero actually saw this as a problem, since it led to a certain amount of hard feelings among Rome's neighbors. Was substantial long term public debt actually an issue for the Roman Republic? Did the banking structure exist to make it possible? (Apparently not)

With these warning signs why not take a few seconds to cut, paste and search for the quotation in Google? That will quickly reveal that it does not appear in Cicero's work,  and its earliest version is from Taylor Caldwell's historical novel, The Pillar of Iron:


Antonius heartily agreed with him [sc. Cicero] that the budget should be balanced, that the Treasury should be refilled, that the public debt should be reduced, the arrogance of the generals should be tempered and controlled, that assistance to foreign lands should be curtailed lest Rome become bankrupt, that the mobs should be forced to work and not depend on government for subsistence..

Caldwell was writing honest historical fiction (as far as fiction is ever honest), and making suppositions about Cicero's beliefs. She probably did not realize the extent she was projecting her own conservative view of 20th c. political issues onto the Roman Republic.

Now, notice how the passage has been massaged by ps-Cicero. A fictional summary of Cicero's beliefs is transformed into a direct quote. "The arrogance of the generals", while a real problem for Cicero, was not very relevant to 20th c. American politics, where arrogant generals are quite properly sacked, so the "arrogance of officialdom" is substituted. All of this was deliberate deception.

Fortunately, we can identify ps-Cicero as Louisiana Representative Otto Passman (or his speechwriter), who recited the fictional quote into the Congressional Record on April 25, 1968.

P.S. If you encounter something apparently written by the other faction that seems egregiously wrong, I beseech you to consider that it may have been written as satiric parody.

Posted by Will McLean at 5:20 PM No comments: