Hanging Up Armor in the 14th Century 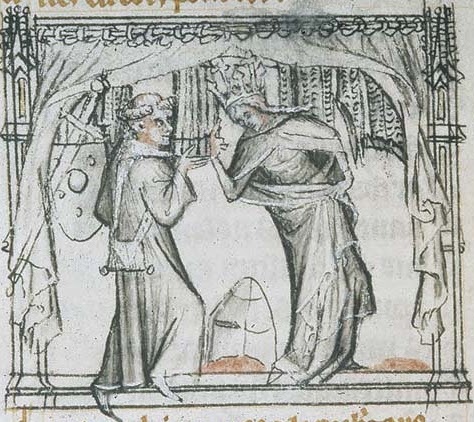 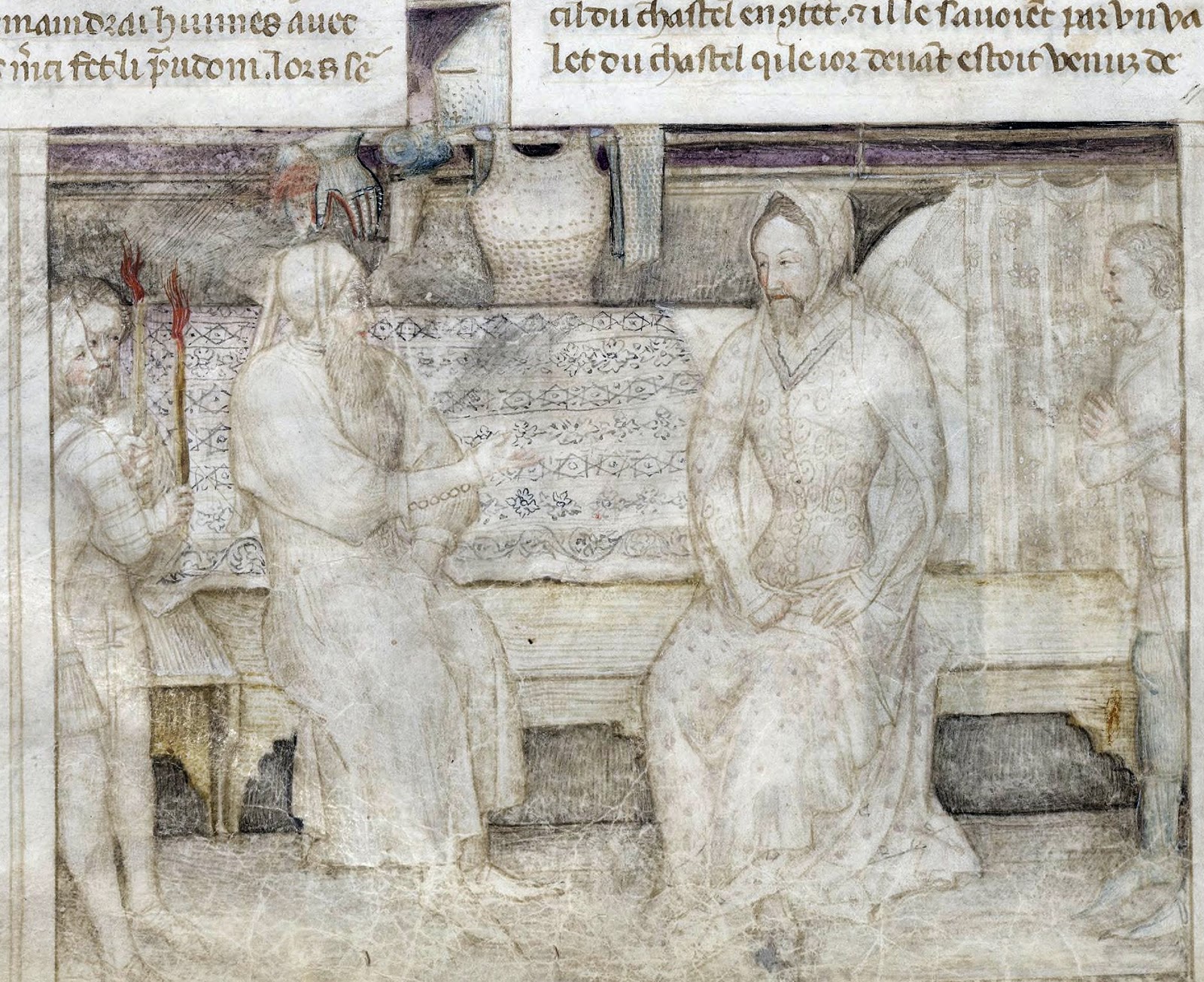 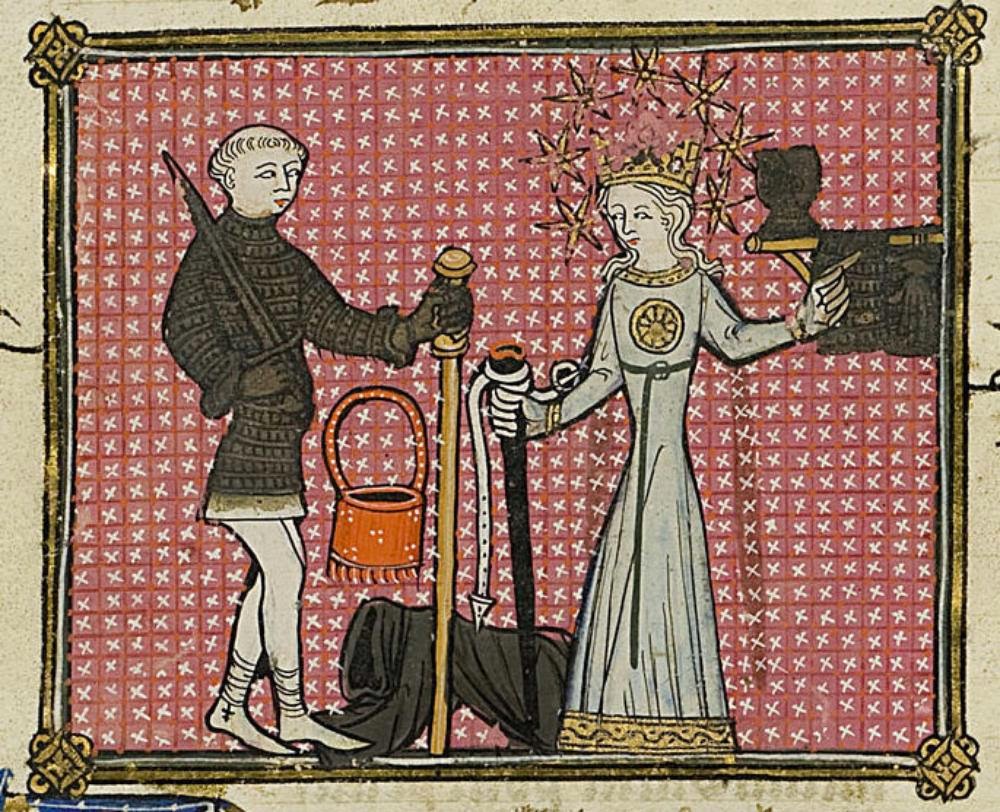 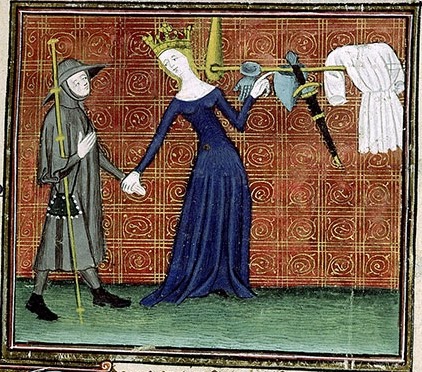 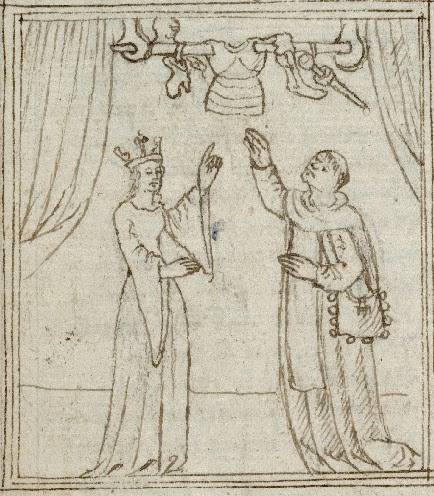 If you are at home you can store your armor in a chest or hang it in a cabinet.  Or perhaps hang it from something like a closet rod, perhaps behind a curtain, for neatness.

One caveat: the two versions of Pelegrinage de la Vie Humaine were written between 1330 and 1355. Guiron le Courtoise was written in the 13th century. The illustrations may conform to the text illustrated rather contemporary practice when the illustration was made.

That said, hanging up armor was still a practice in the mid 15th century: the splendid intarsia panels at Urbino show armor suspended inside a cabinet. 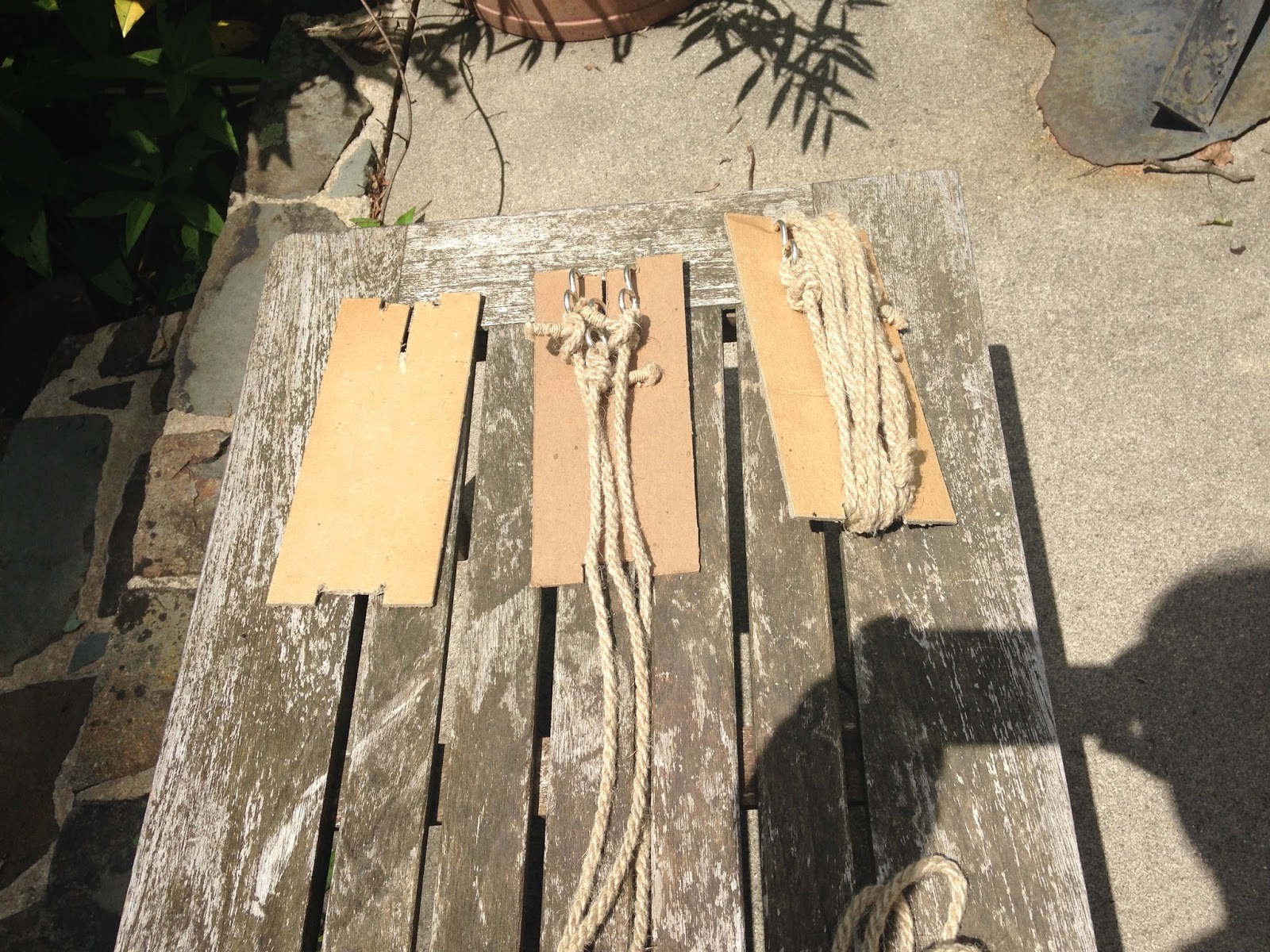 These crow foot ropes have hooks to attach them to my pavilion. If I simply coil them for storage  the hooks have a malicious tendency to hook the cords wherever will entangle them most effectively. I made these slotted cards of heavy card stock, and fit the hooks into the slots as I unhook them from the tent. I then wind the cord around the card as shown.
Posted by Will McLean at 1:23 PM No comments:

Loss of English Horses at Agincourt

The chronicles agree that the English lost many horses when the French looted their camp at the battle of Agincourt. The shipping account of the earl of Oxford's return trip gives some indication of the level of loss. Of 84 archers, all originally mounted, only 37 returned with horses. The earl and his 39 men at arms brought back 87, including six for the earl's cartage. Based on 14th and 15th c. English shipping allowances of three horses per squire and more for higher ranks, the earl and his men at arms probably left Harfleur with about 140 horses.

Other companies may have lost more or less. 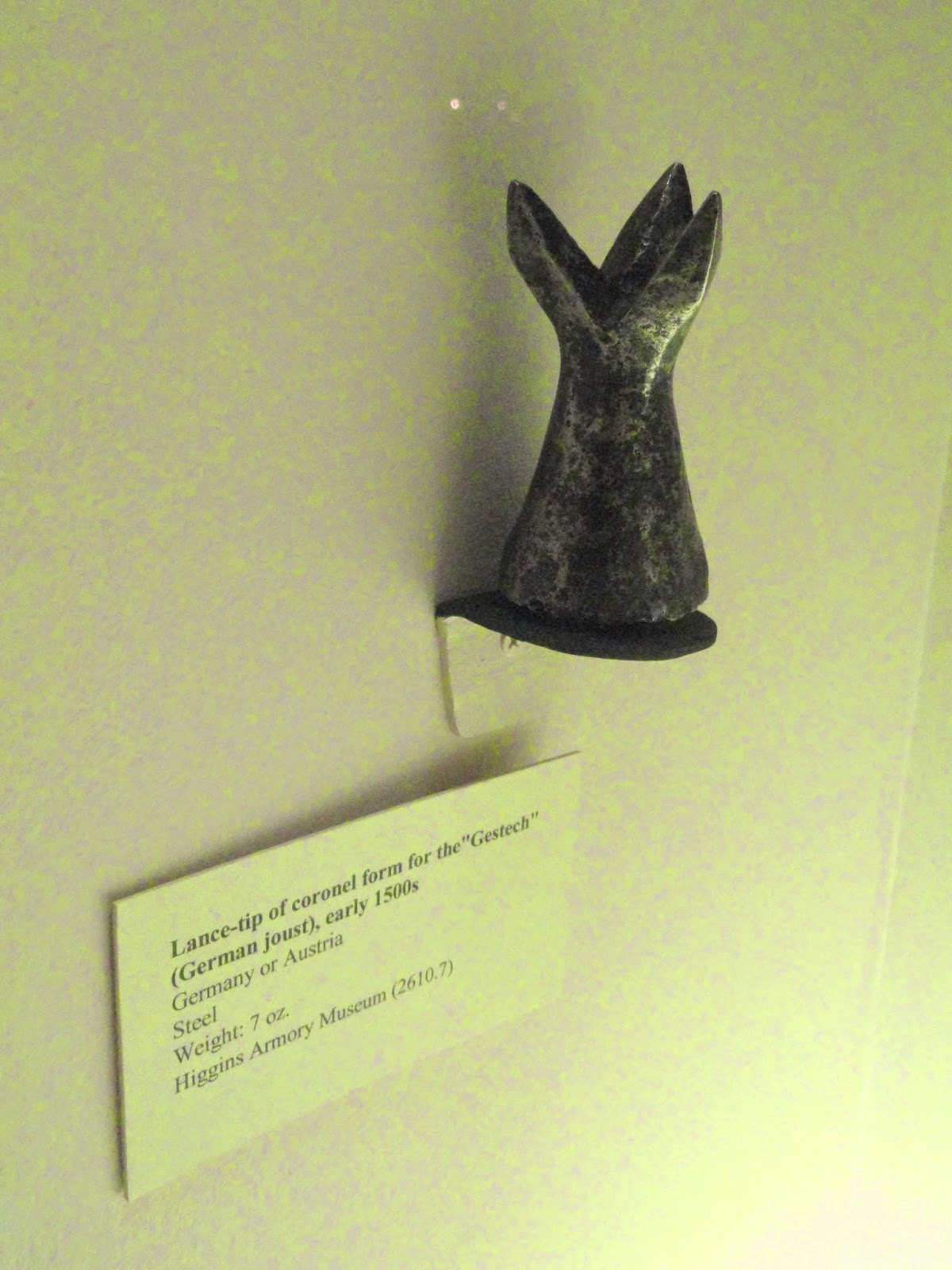 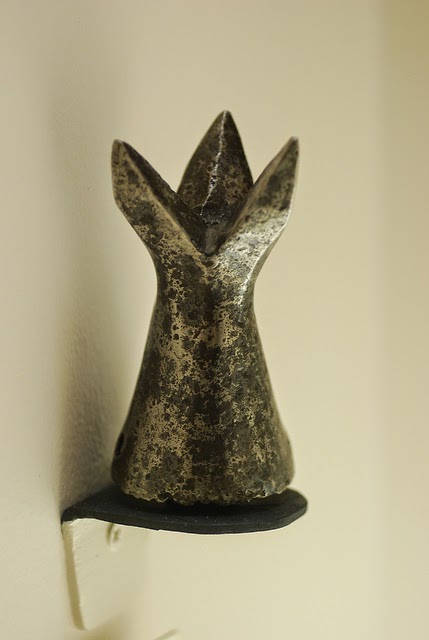 Early 1500s. Another image of the coronel from the Higgins shown above.

16th or possibly 18th century.
Here, here and here are jousting lance heads in the Metropolitan Museum of Art, with a coronel at front left.

A 14th c. English joust announcement also talks of lances Roques, that is to say, with heads like the rook of a medieval chess set.  The medieval rook was shaped a lot like the surviving coronels, or the images of them in medieval iconography.

The Met lance heads show that jousting with sharp lances did not necessarily mean that the points of those were literally sharp by any other standard than those of Crayola Crayons.
Posted by Will McLean at 8:54 PM No comments:

Manuscript Miniatures Note that the Lyon Grandes chroniques de France looks later than 1380 to me and the Lyon library dates it to the end of the 14th century.
Effigies & Brasses Both of these are limited to England, France, Belgium and the Netherlands.

Why the particular date range? Because I'm part of La Belle Compagnie. In addition to the  years leading up to Agincourt, we do a 1382 and a 1386-7 scenario, John of Gaunt's expedition to Galicia, which is well suited to the weather at a June event we do in Cape May NJ. I was going to take it back to only 1377, but adding two years brought in a lot more images.

The Black Prince and Pembridge helms.  By this time, I believe these were for jousts and tournaments, not war. And mostly jousts. 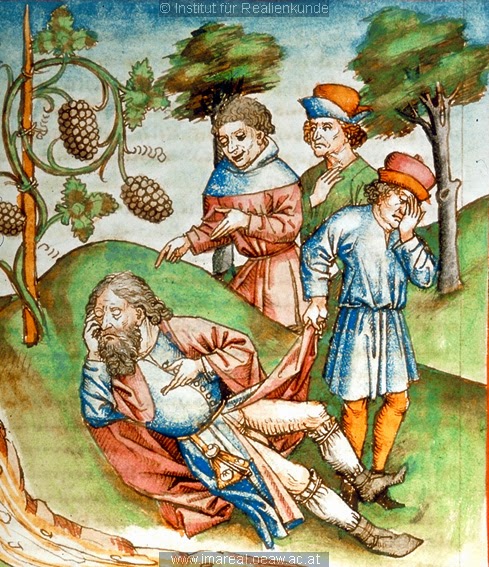 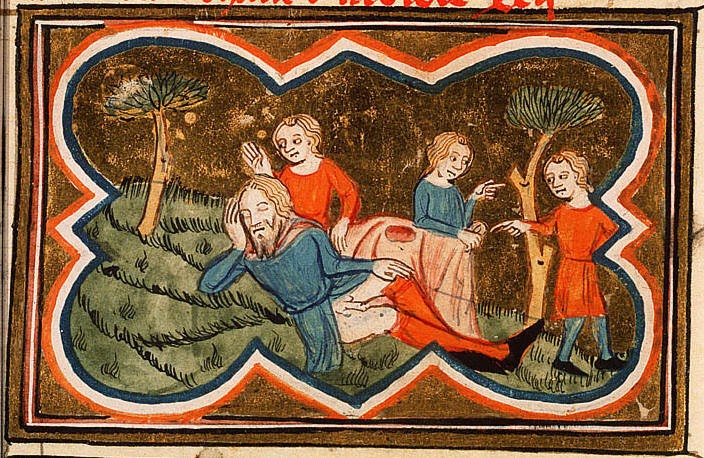 It is well to know that in the second half of the 14th century century and the 15th century, there were three main types of hose, each designed to be supported by a different default method.

Short Hose: supported by a garter below the knee or similar method. Most often worn by women, but sometimes by men, and designed to be worn with a long garment.

Single point hose: longer hose supported from a single point on each leg.  This is reliably decent only for medium length outer garments hemmed not far above the knee. A lot of hems during that period were that long, even for the male fashionable elite. But get much shorter and you start flashing your breeches when you bend, turn around, or sit down.

Now, breeches are shown in medieval art, but usually not in situations that gentlemen would want to normally be seen in in public: agricultural laborers laboring sweatily, bakers feeding an oven, prisoners stripped for execution, executioners stripping down to execute victims with less encumbrance, people caught in the middle of changing, people caught in flagrante delicto. Or maybe when young gentlemen practice sword and buckler, but perhaps they don't do that in the street.

This brings us to:

Multi-point hose: cut high enough to lace up at multiple points near an approximation of the natural waist. The Charles de Blois pourpoint or doublet, which may or may not have been made  before his death in 1364, attaches to hose in seven places, with two lace ends at each.

At some point two legs of this kind of hose are sewn together into a single garment. This doesn't change what what holds it up needs to do much.

Single point hose often look like they are simply laced to breeches, but the reality was more complicated. It appears that when this was the case there was a substantial belt in the casing of the breeches. Below, a woodcut of the martyrdom of St. Sebastian from 1410-1420 clearly shows a belt. 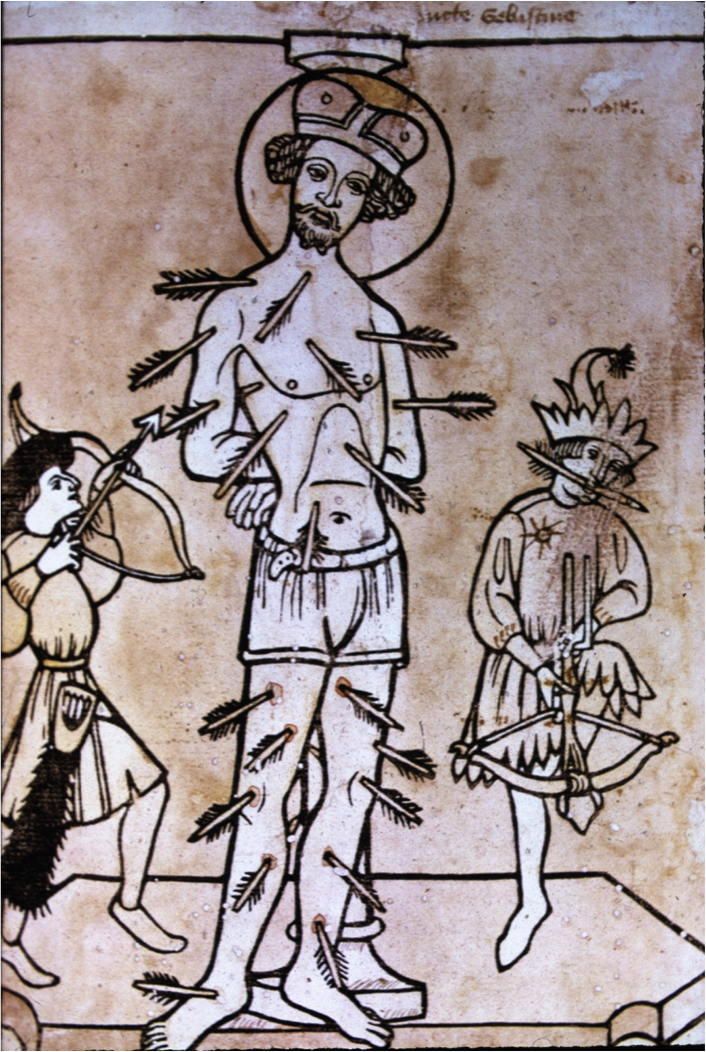 Similarly, belts can be seen in the breech casings of the two thieves of the Parement of Narbonne. Still earlier, we see a broad green belt within Saul's breeches casing as he eases nature in the Morgan Bible. 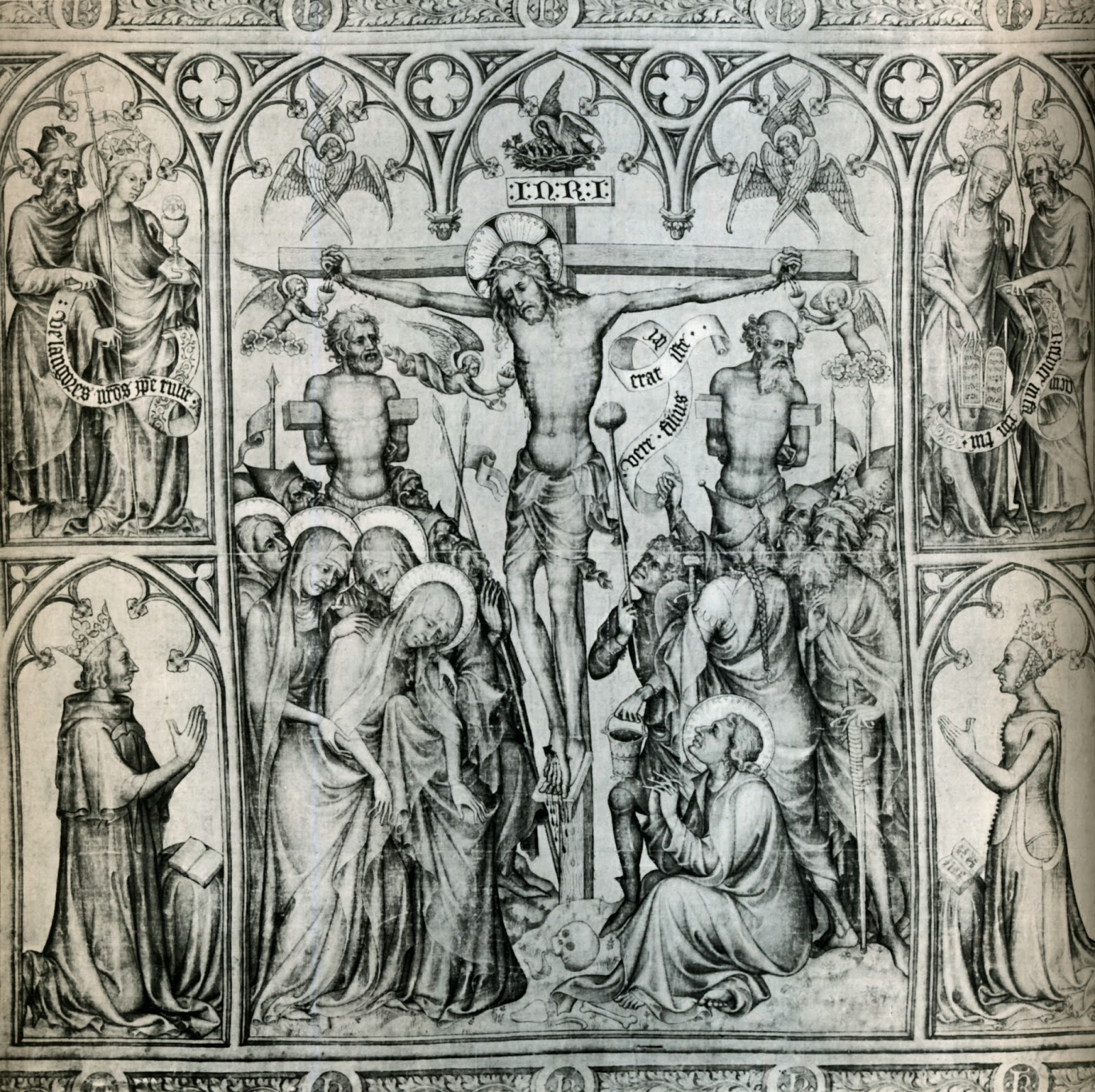 For multi-point hose, the optimal support system seems to have been lacing it to a doublet.  When this kind of hose is laced up bending or sitting puts a lot of stress on the back points, and tends to drag down a belt in back if it is the only support for the hose.
Posted by Will McLean at 8:59 PM No comments: 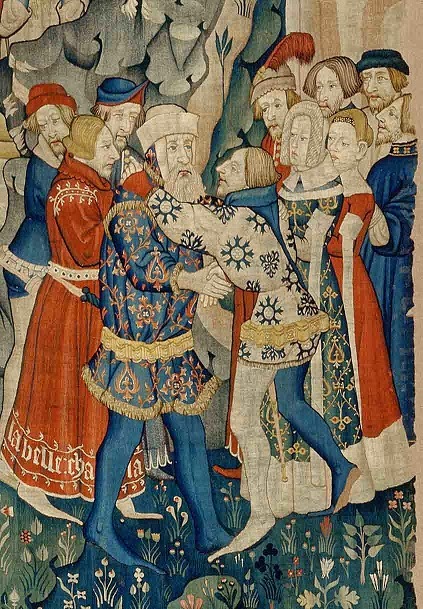 From the tapestry of Jourdain de Blaye in Padua, c. 1400. Nice outfits. Some lovely hats, belts and fabric. The lettering on the hem of the red gown one back from center front on the left was probably embroidered. I don't know an easier way to do it. Click to enlarge.
.
Posted by Will McLean at 4:45 PM 3 comments:

From England, France, Belgium and the Netherlands:

From Manuscript Miniatures. Some of these have deliberately exotic elements because of a setting that is supposed to be classical, mythical, historical, Asian, or more than one of the above. They should generally be pretty obvious.

From Armour in Art
Posted by Will McLean at 5:46 PM No comments:

The lady looked o'er her own castle-wall
To a bloody scene like writ by Mr. Martin
And said "The blood is like the medieval age
But where are the jokes about fartin'?"