The Economics of Trial by Battle

Peter Leeson has a preliminary draft of his paper on the subject here.
Posted by Will McLean at 8:45 PM 1 comment:

The 2009 film is the kind of SF film that's frustratingly rare: an idea driven exploration of the human condition. It's also, like the 1980 Lathe of Heaven a Dickian movie that manages to feel more true to the spirit of Philip K. Dick than most of his works that made it to the big screen. The lonely sadness and paranoia is lightened by surprisingly humane gestures from a character we might not expect to exhibit humanity.

There's a lot of loving homage to 2001, but the sterile interiors are grimy and littered with post-it notes, and the trope of the calm voiced unreliable cyclopean A.I. is subverted.

The modest budget is used economically but effectively to convey a barren but beautiful lunar landscape and a distant industrial complex tended by a single lonely man with robotic assistance. It comes closer to respectfully capturing the costs and risks of sending humans to work beyond low Earth orbit in the 21st century than any I can remember.
Posted by Will McLean at 8:51 AM 1 comment:

Living in the Future Links

Dalek Eggs. ADORABLE! ADORABLE! Plus Steampunk Dalek and the Exterminit Knit Dalek, not to mention the Voice-changing Dalek Helmet (not suitable for children under 16)
Dieselpunk TV
Computer Engineer Barbie and the far more disturbing Cyborg Barbie
Pillows for SCIENCE!
Posted by Will McLean at 9:23 AM No comments:

As I have argued before in the pages of this journal, NASA has over its history employed two distinct modes of operation which, for shorthand, we can call the “Apollo Mode” and the “Shuttle Mode.” The Apollo Mode, which prevailed in the human spaceflight program during the period from 1961 to 1973, involved first choosing a mission goal, then developing a plan to achieve that goal, and then designing and developing the hardware and technologies needed to implement the plan. The hardware set is then built, after which the mission is flown.

Where to begin? NASA, over its history, has employed two distinct modes of operation. The Apollo Mode began in 1961 and reached its peak in 1969. After our first manned landing in 1969 the program rapidly lost momentum and Saturn V production ended in early 1970. The last lunar mission was in 1972. During the Apollo Mode, we chose to use manned space flight to demonstrate our superiority over a rival superpower. We devoted enormous resources to that goal, and once we achieved it we lost interest. The Apollo era was a brief spasm when national pride and prestige inspired massive spending to meet an arbitrary deadline to win bragging rights over the Soviets.

The other mode was everything else: NASA before 1961 and after Apollo: in short, the vast majority of its history.

Also, the Apollo program did not simply choose a mission goal and then develop the technology to achieve that goal. The F-1 rocket engine that sent Apollo rockets to the moon was developed to meet a 1955 USAF requirement. Requirements for what would become the Saturn family were issued in late 1956 or early 1957. We didn't settle on lunar orbit rendezvous as our plan to reach the moon until 1962.

The Apollo program did not follow the Zubrin ideal of choosing a single goal and then building the technology to achieve it. Which is fortunate, because if we had the technology wouldn't have been ready when we wanted to go.

He then follows up with:

The potential utility of orbital propellant depots — basically gas stations in space — as a way to enable manned missions to the Moon, near-Earth asteroids, or Mars has never been established.

It hasn't been established because it hasn't been attempted yet, like lunar orbit rendezvous in 1962. It's clear that it has the potential to be tremendous game changing technology, allowing manned missions beyond earth orbit to be accomplished either with existing launchers, or with much smaller new launchers than we'd need without it.

Zubrin's pet Mars architecture is one of those plans, which may explain his hostility to propellant depots
Posted by Will McLean at 9:52 PM No comments:

Sextan Shepherd created this richly detailed steampunk underwater base in Second Life. In his spare time.

Who can resist giant robot shrimp?
Posted by Will McLean at 1:18 PM No comments: 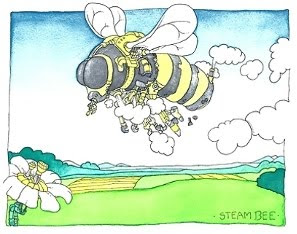 It's spring and the carpenter bees are out. For years my wife has called them steam bees because of their size and their slow, noisy, blundering flight. Some years ago that name inspired the above illustration, which appears on some of the more popular items at my Meateatersaurus CafePress store.

Meateatersaurus is my CafePress store featuring goods with my artwork not related to the Middle Ages, such as the Steampunk Bee and Saturday Night in the Mesozoic

Also visit Commonplace Goods, my CafePress store for goods related to the Middle Ages and medieval recreation. Your only source for the Last Days of the Norsemen in Greenland T-shirt, the Bascinet Faced Pig throw-pillow, and other finest quality goods. Kettlehats has the Kettle Hat design on a wider array of products.
Posted by Will McLean at 4:14 PM 2 comments:

Peeps Sushi and the 2010 Peeps Diorama Contest.
Posted by Will McLean at 12:21 PM No comments:

I for One Welcome Our Towel-Folding Autonomous Overlords

The video clips are sped up by a factor of 50:1, so our robot overlords have a way to go before the singularity.
Posted by Will McLean at 1:51 PM No comments:

From ThinkGeek. Available today, along with other fine products.
Posted by Will McLean at 12:55 PM No comments:

An Exciting Day for Medievalists

Scholars have discovered another MS of the text in Harleian 3542, The Man that Wol. The new find includes a glossary, clearly explaining the meaning of hawke, rennyng quarter, rownde, cantel and other terms previously obscure.

In a related development, a German text has been discovered explaining the uncaptioned earlier portion of the Codex Wallerstein.

Finally, Mel Gibson has announced a new directors' cut of Braveheart, which will include a CGI rendering of Stirling Bridge added to the Battle of Stirling Bridge. Also, all scenes featuring Princess Isabelle will be reshot. She will be played by Mairi Ella Challen and all her scenes will take place in France, where her father will mention negotiations for her future marriage when she's twelve. Prince Edward's scenes may be reshot as well, and Ricky Martin is being considered for the role.

What an eventful day April 1st has been!
Posted by Will McLean at 9:18 AM 1 comment: