The earl of Derby took six minstrels with him on his two expeditions to Prussia in 1390-93: two trumpeters, three pipers and a nakerer in the first expedition, three trumpeters and three pipers in the second. The three kinds of instruments are typical of those shown used by musicians accompanying soldiers in manuscript illustrations of the 13th to 15th centuries.  Several pictures from Le chroniche di Giovanni Sercambi ASL MS.107,  1368-1424, show a musician at the head of a column of infantry playing a pipe and tabor.

Froissart reports trumpets being used to signal alarm, command attention for orders, and command attack and retreat. By this time civilian huntsmen like William Twyti knew at least six different horn calls, each with a different meaning, and military trumpeters may have had at least as complete a vocabulary.

Machiavelli wrote in 1521 about commands also being given by pipe and drum as common practice in his time, and later fife and drum were used to deliver a rich vocabulary of battlefield and camp commands. I don't know how long before 1521 the practice began.

There is a lot we don't know.
Posted by Will McLean at 9:48 PM No comments:

Properly fitted medieval hose should not bag significantly at the knees. If it is so long that it can't be laced high enough, there is a quick solution for hose that laces at one point for each leg: pin a ring brooch on each leg low enough to allow you to lace to the brooch and pull the hose taut, and tuck the excess material at the top of the hose inside.
Posted by Will McLean at 4:11 PM No comments:

L’Art d’archerie divides arrows into two types, waxed and glued. The arrows from the Mary Rose seem to be examples of the first type. At the shaftment, where the fletchings would be attached, archaeologists have identified traces of wax, tallow, copper, and the imprints of thread wound in a spiral around the shaft that they believe to be silk. The copper was probably in the form of verdigris.

The Westminster Abbey arrow, from sometime after 1420, also shows the traces of spiral wound thread. In both cases the thread has almost entirely perished, but enough survives to identify the color as dark red.

Wax, red silk and "verdegresse" were mentioned for the making and repair of arrows for the king of Scotland in 1456.

Speaking of waxed arrows, L’Art d’archerie says: "The harder the silk is on the wax, the better the arrow will fly and the stiffer it will be." (Plus est dure la soye sur la cyre et plus est le trait errant et plus dure.) Submerging the thread in a coating of wax would both help lock it in place and protect it from wear as it shot down the bow.

L’Art d’archerie identifies a different approach, the glued arrow. Animal glue can provide an acceptable bond without thread. Surviving arrows made by Turks and Romans seem to have relied entirely on glue, and at some point before modern adhesives the English longbow tradition came to do so as well. Hugh Soar reports that an English fletcher was still being taught to fletch with hoof glue in the early 20th c. 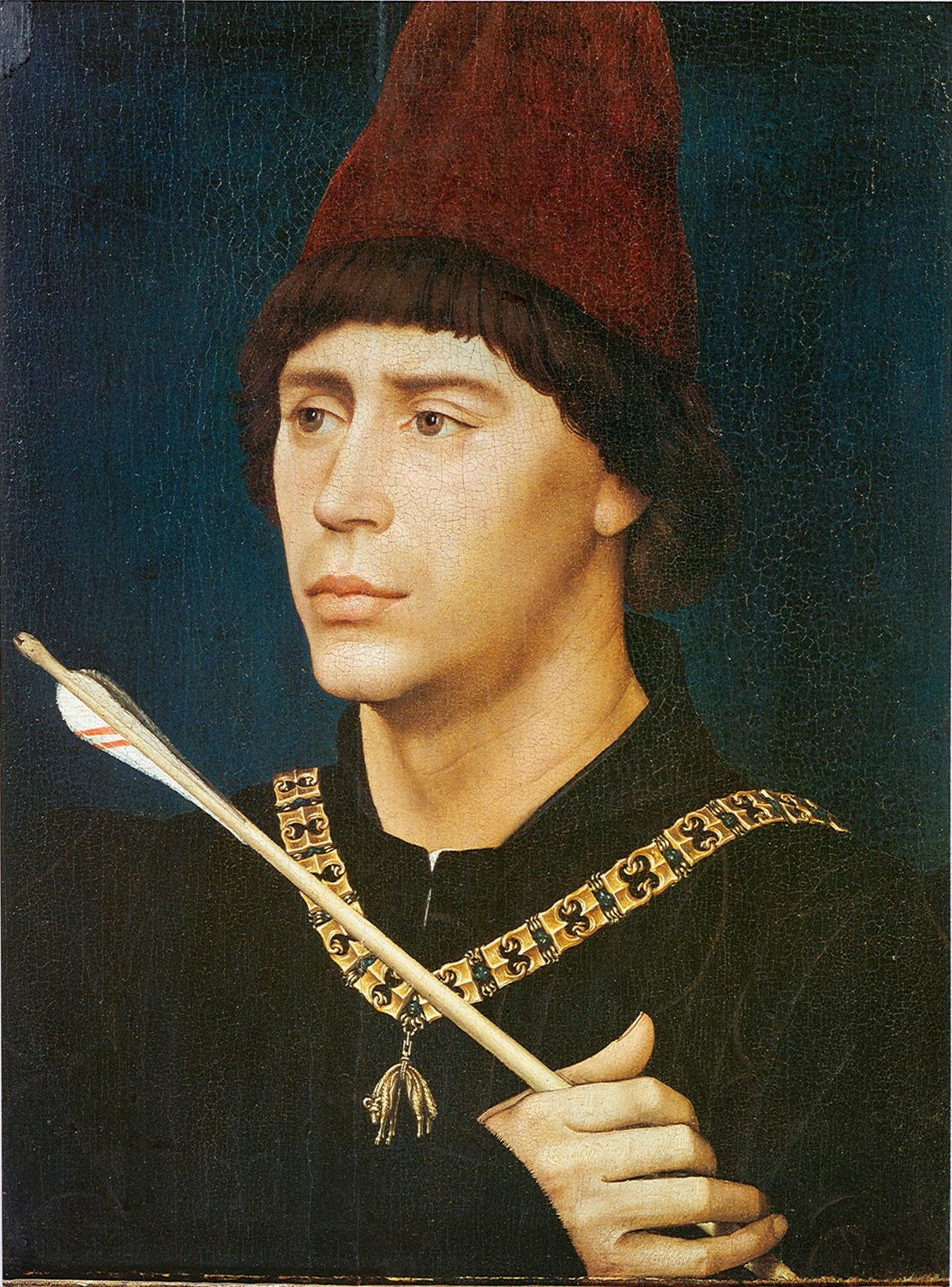 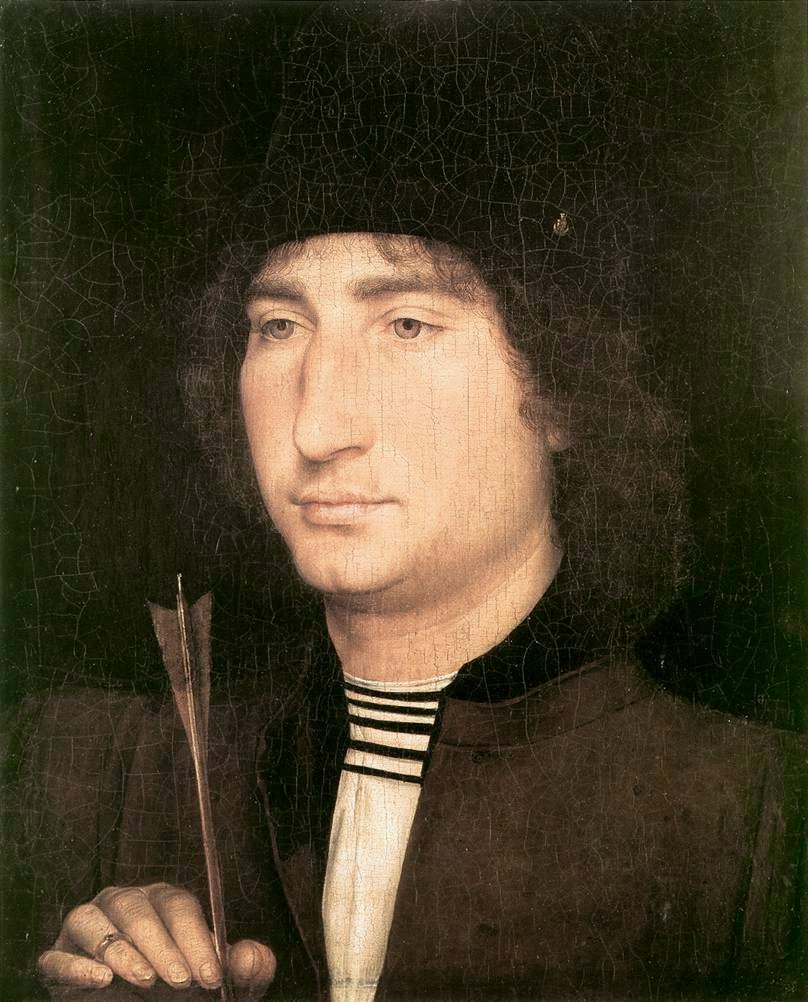 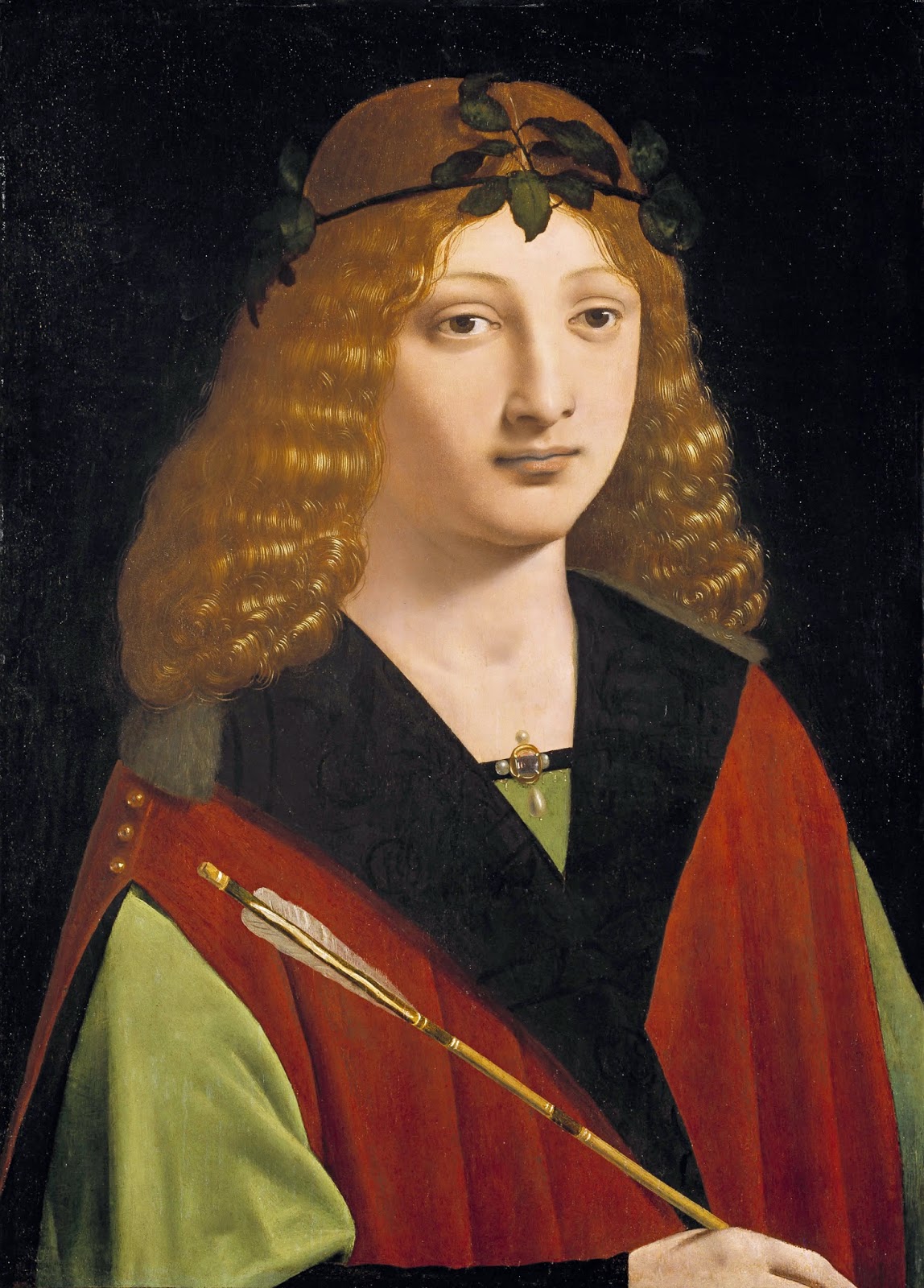 While the Mary Rose arrows were almost certainly waxed, and the Westminster Abbey arrow probably was,  L’Art d’archerie tells us: "There are two sorts of glued arrows, sheaf (tacle) and flight. The sheaf arrows are usually thick, with high swan feathers, cut large, in the same shape as those of flight arrows, and have round iron heads. They are the regular arrows which the English use for butt and target shooting (au chapperons i.e. clout shooting), for they find them, as they are, truer than any waxed arrow.

We find further evidence that the even the English didn't always use the waterproof Mary Rose style waxed arrow with spiral thread winding in this report from Ireland by Sir William Skeffington in 1535.

"...there did fall suche a rayne as hath not been seene in thes parties; so that the fotemen wadid by the way to the middels in waters, which was pite to see,....the sayd fotemen that coulde not have defended themselfes with ther bowes, for ther stringes wer so weate, and moost of the fethers of ther arrowes fallen of."

Robert MacPherson has kindly provided me to a reference to an incident in 1594 when a serving-man  in Yldre managed to burn down a farmhouse while fletching bolts with his gluepot. This was probably a good example of fletching with hot animal glue.
Posted by Will McLean at 10:04 PM No comments:

Anarcho-Capitalism is the belief that it is practical to replace government coercion with voluntary private agreements.

This idea has several failure modes. The most obvious is portrayed in Kurosawa's great Seven Samurai.  If you haven't seen it, I beg you to do so a soon as possible. It is a great piece of cinema.

If you have, you will recall that during the 16th century, a time of civil war, a Japanese village discovers that they are on the do list of about 40 marauding bandits, who decide to postpone looting until the harvest is in. After consultation with the local matriarch and crone, the villagers agree that their best course of action is to hire a small group of samurai for protection. Hungry samurai, since the village can only afford to pay room and board.

Fortunately, the villagers delegated to hire security encounter Kambei Shimada, an aging, altruistic samurai played by the great Takashi Shimura. He concludes that the village defense requires no less than seven samurai, more than the delegates were authorized to hire, and eventually assembles a team, many of whom follow him for reasons beyond the meagre room and board offered by the village.

After Kambei arrives at the village, he begins planning a defensive perimeter that will leave several farms undefended because they are indefensible. The outlying farmers attempt to opt out of the defense agreement and defect. They are quickly coerced back into the ranks by the samurai. Because the protection agency that the village voluntarily hired can coerce, and it will coerce if that's the only way to win, and it was. And these are the good guys.

Italian history is full of condotieri who concluded 'Nice city-state you've got there. I'll take it.'

This is very much a filmed record of a stage production, so we don't experience the cinematic freedom of the Queen of the Night singing while riding atop a tank by moonlight or smoking beneath the No Smoking sign during intermission as we do in the Branagh and Bergman films.

But it is an excellent stage performance, with sets that draw the link between Sarastro's temple and the Enlightenment with robed savants, books, blackboards, an astronomical globe and an homage to Joseph Wright's A Philosopher Lecturing on the Orrery. Scenes of magic make apt use of masks and puppetry. And Diana Damrau was a wonderful Queen of the Night, her naturally sweet face made frightening by artful makeup and a Eddie Munster widow's peak. Her voice and acting in the role were splendid. When she winds up one of the queen's Teutonic rants I start worrying that she's about to invade Czechoslovakia.

The mallard decorations on Papageno's sweater were a nice touch, as was his duck hat.
Posted by Will McLean at 8:19 PM No comments: 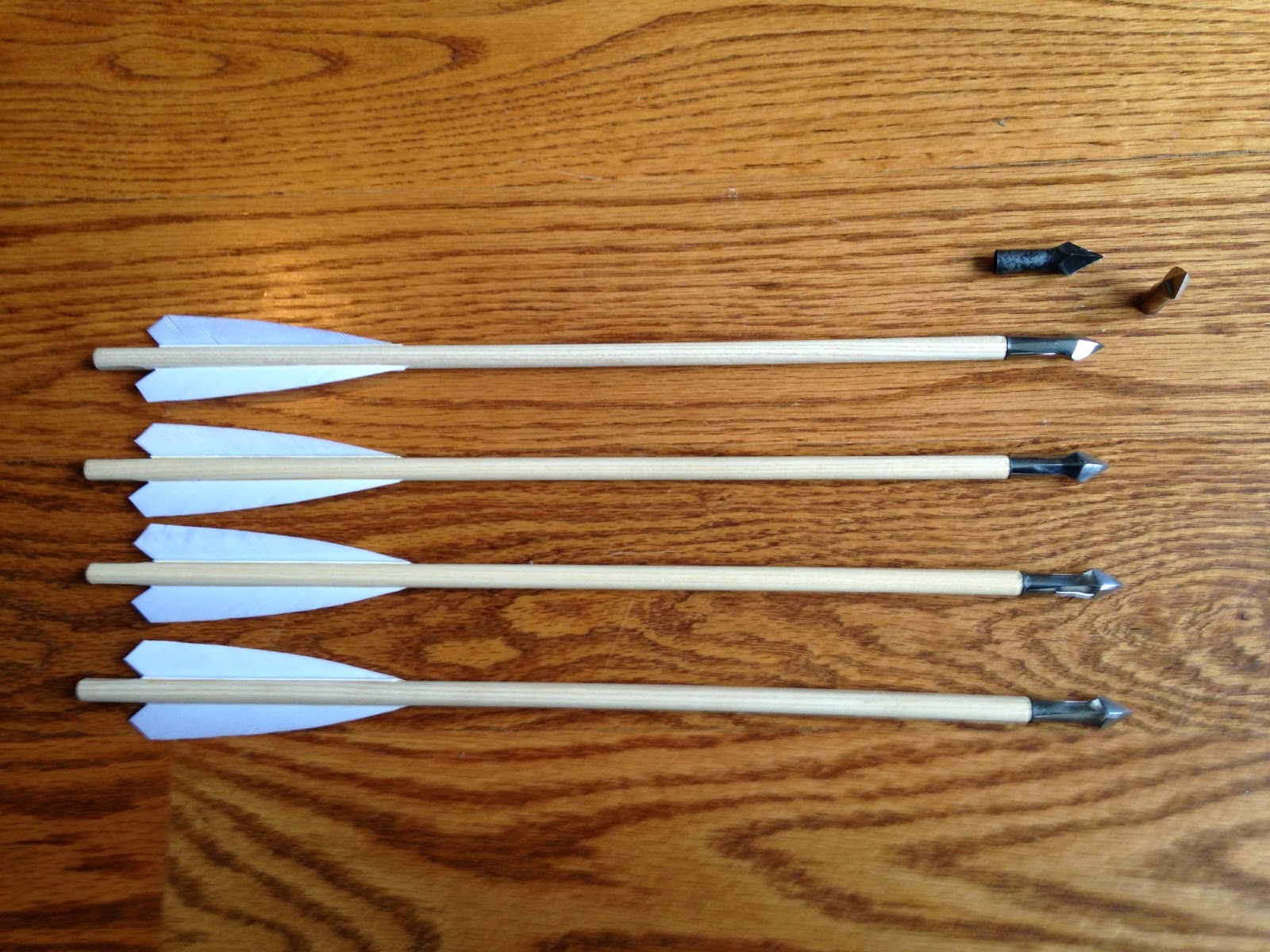 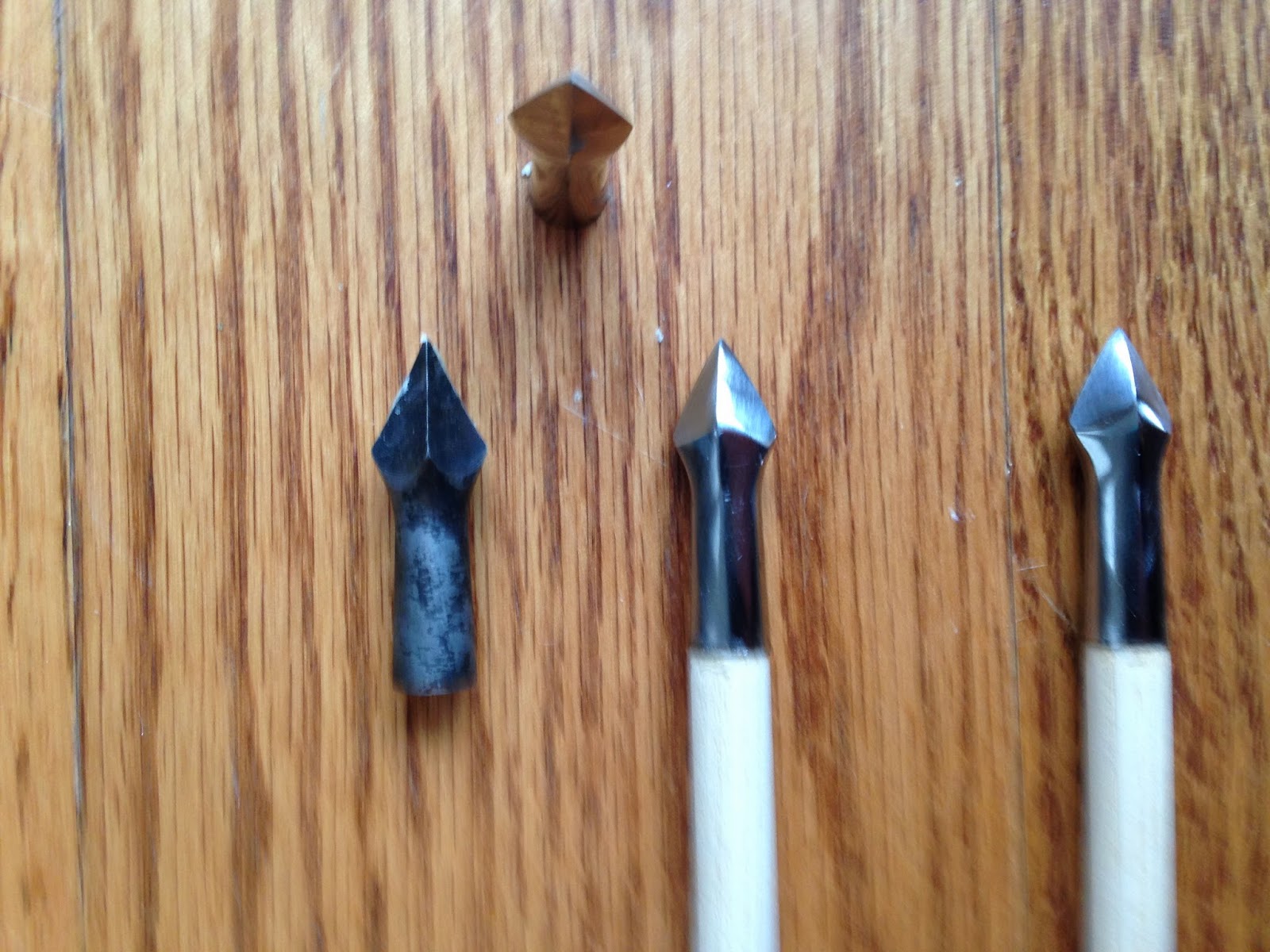 These were made by Robert MacPherson. The heads were ground from 3 Rivers Archery Short Bodkin Points. The point before grinding is on the left below, and after grinding at top with the point upwards to show the reshaped diamond section. The shafts are ash.
Posted by Will McLean at 2:52 PM No comments: